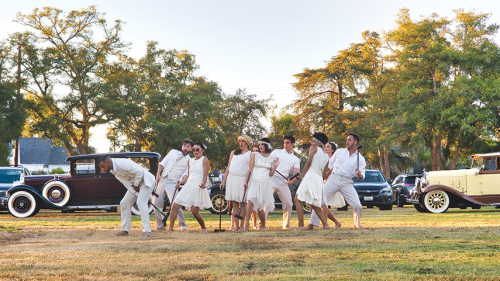 The “Gatsby Redux” is an immersive theater experience coming to the Greystone Mansion and Gardens April 27-29. (photo courtesy of the city of Beverly Hills)

The city of Beverly Hills Community Services Department, in partnership with director and choreographer Janet Roston and Mixed eMotion Theatrix, presents the dance theater production “Gatsby Redux” from April 27-29 at the Greystone Mansion and Gardens: The Doheny Estate.

The “Gatsby Redux” production has been featured at historic man­sions throughout the United States, and is making its debut in Beverly Hills. This site-specific, 90-minute production involves audience members following the dancers through the terraced grounds, exploring themes inspired by the “The Great Gatsby.”

The “Gatsby Redux” was origi­nally commissioned by the Los Angeles Music Center and per­formed in the Blue Ribbon Garden at the Walt Disney Concert Hall.

“My ties to Beverly Hills run deep and it’s wonderful that after touring the production, it will be performed in my home communi­ty. Greystone is the perfect site for the show. One can truly imagine attending one of Jay Gatsby’s gar­den parties on the grounds of the mansion.”

“The city of Beverly Hills is thrilled to be presenting Janet Roston’s ‘Gatsby Redux’ at Greystone, as together they repre­sent an inspired pairing of a Gatsby-era dance performance placed with­in a Bohemian-aged iconic man­sion,” said Ben Johnson, manager of arts and culture for the city. “The setting will be spectacular, and the performance will feature Janet’s finely-honed choreography and exquisite dancers. This will truly be one-of-a-kind special evenings that are quintessentially Beverly Hills.”

The performance will be held outside and will involve walking, at times on slate, grass and stairs. Comfortable shoes are encour­aged. Guests are encouraged to arrive from 6-7 p.m. and dress in 1920s-themed attire. Photo ops will be available on the terrace of Greystone Mansion. For questions regarding accessibility, call (310) 285-6830.

Tickets for Beverly Hills resi­dents are $15 and are currently available. Non-residents can pur­chase tickets for $20 beginning on March 30. For information, call (310)285-6830, or visit beverly­hills.org/gatsbyatgreystone.