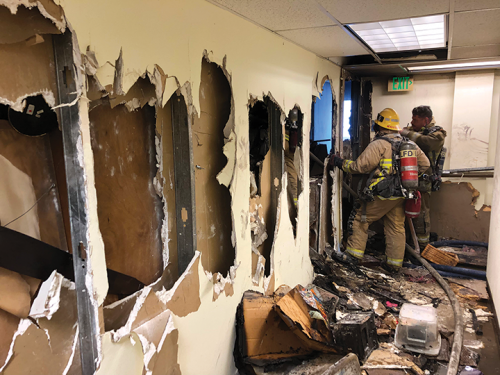 Due to excessive storage, firefighters had to breach walls to access the rooms where the fire occurred. (photo courtesy of the LAFD)

Firefighters extinguished a blaze in a Koreatown office building on March 10 and located the body of a male victim. The fire was reported at approximately 3:30 p.m. in a four-story building at 611 S. Catalina St., just south of Sixth Street. Firefighters found smoke coming from two rooms on the second floor but were unable to access them because excessive storage blocked the doors, Los Angeles Fire Department spokeswoman Margaret Stewart said. Firefighters broke holes in interior walls to reach the flames and extinguished the blaze in 35 minutes. The victim’s body was located among furniture and debris, Stewart added. The Los Angeles County Office of Medical Examiner-Coroner is in the process of identifying the victim, spokeswoman Sarah Ardalani said. LAFD arson investigators, in conjunction with the Los Angeles Police Department, are investigating the incident, which is standard protocol for fires that result in fatalities.