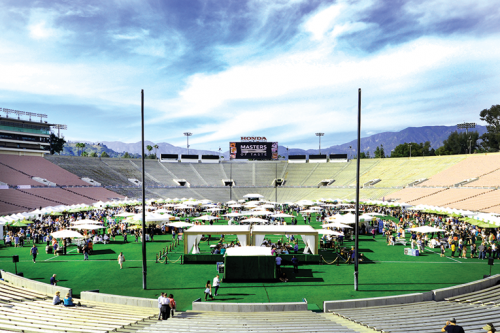 Enjoy the 5th annual Masters of Taste, L.A.’s premier outdoor, luxury food and beverage festival, on Sunday, April 3, from 3-7 p.m. on the field of the Rose Bowl in Pasadena.

Masters of Taste is introducing Chef Vanda Asapahu as the first female host chef. Asapahu is the chef and owner of Ayara Thai and has participated in Masters of Taste since the event’s inception in April 2016.

Asapahu attended UCLA and Yale, and afterward spent four years living, traveling and working in Thailand before returning to Los Angeles. She brought back treasured recipes and new flavors to share at Ayara Thai. Under her leadership, Ayara Thai was named one of Michelin Guide California’s 2019 Bib Gourmands in May 2019.

Masters of Taste 2022 will bring together over 3,000 food and beverage enthusiasts. It will include fare from over 100 culinary masters and restaurants, delectable sweets and top beverage masters who will present signature handcrafted cocktail tastings from over 25 spirit brands and bars. Select wineries, local craft breweries, cold-pressed juice producers, cold brew coffee makers and live entertainment will also be included.

This year, Masters of Taste will be held in April, during which Thai new year, known as Songkran, is also celebrated. Asapahu has invited three additional L.A. Thai restaurants to participate in the Songkran Thai SELECT Pavilion, a celebration spanning the Rose Bowl’s end zone. The celebration will reflect a traditional Thai sundry general store and Songkran festival. As a culinary challenge, each Thai restaurant will prepare a dish, dessert and cocktail using a common paste, sahm kler (“three buddies”), which is made from white peppercorn, garlic and cilantro root.

General admission is $135. VIP admission is $195 and includes early entrance at 3 p.m., special access to VIP lounges and exclusive tastings. The Rose Bowl is located at 1001 Rose Bowl Drive. For information, visit mastersoftastela.com.