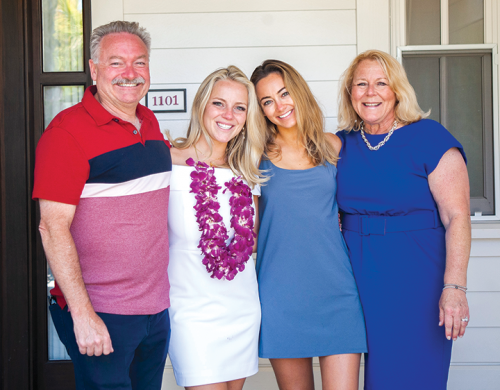 Linda Delaney, right, is raising money to find a cure for leukemia. She is shown with her husband Mike, and daughters Kelly, second from left, who is a childhood leukemia survivor, and Dana. (photo courtesy of Linda Delaney)

In 2001, Kelly Delaney was diagnosed with acute T-cell lymphoblastic leukemia, also known as ALL, at the age of 3.

Leukemia, which is a cancer that affects the blood, claims the lives of more than 57,000 people each year, according to the Leukemia and Lymphoma Society. But a leukemia diagnosis doesn’t mean there is no hope, which is the message that Linda Delaney and her daughter Kelly want people to understand.

The diagnosis devastated the family and left the Delaneys struggling to find help and resources. The family’s pediatrician directed them to City of Hope, a cancer treatment and research center in Duarte, California, where Kelly was treated for three years.

Now 23, Kelly’s leukemia has been in remission for nearly two decades. As way of giving back, she has taken a job as the campaign development manager for the Leukemia and Lymphoma Society Greater Los Angeles Region.

Linda Delaney hopes Kelly’s story will inspire others, and she is participating in the Leukemia and Lymphoma Society’s Visionaries of the Year Campaign, which runs through May 22. The campaign is a fundraiser supporting leukemia research, and Linda Delaney has set a goal of raising $200,001, an amount that symbolizes the year her daughter was diagnosed with the disease, she said. With eight friends and associates, she formed Linda’s Lifesavers, a group that is raising funds for leukemia research. She said the effort is going well, generating more than $23,000 from the start of the campaign on March 11 through March 17.

“We are trying to get sponsorships and large businesses to make gifts, and are accepting personal donations,” Linda Delaney said. ”Everybody has been wonderful. They are very motivated to help.”

Linda Delaney said Kelly’s road to recovery was filled with uncertainty, and it’s a miracle that she now lives a normal, vibrant life. She described the leukemia diagnosis as a mother’s worst nightmare but said she never gave up hope.

“We were just devastated,” Linda Delaney said. “It was touch and go for a long time. She started to respond to treatment but then threatened to relapse. Every day, literally, my fists were clenched worrying about how it would go.”

“I can tell you, I owe them everything,” she added. “How can you ever give thanks for what they did? It was the best possible outcome.”

City of Hope works closely with the Leukemia and Lymphoma Society, and when the nonprofit was seeking childhood leukemia survivors for a campaign to raise awareness about the disease, the medical center recommended Kelly.

At age 9, the Leukemia and Lymphoma Society named her Girl of the Year, and Kelly continued collaborating with the organization on programs throughout her teenage years. In 2017, Kelly raised $60,000 during the Leukemia and Lymphoma Society’s Students of the Year campaign. Today, she helps the organization with fundraising in her position as campaign development manager.

“It’s all about funding and generating the money that will lead to these cures,” Kelly Delaney added. “This campaign 100% saved my life.”

Anyone wishing to donate to the Leukemia and Lymphoma Society through Linda’s Lifesavers is encouraged to visit pages.lls.org/voy/calso/los22/ldelaney.

. For information about the  Leukemia and Lymphoma Society and its work to find a cure, visit lls.org.