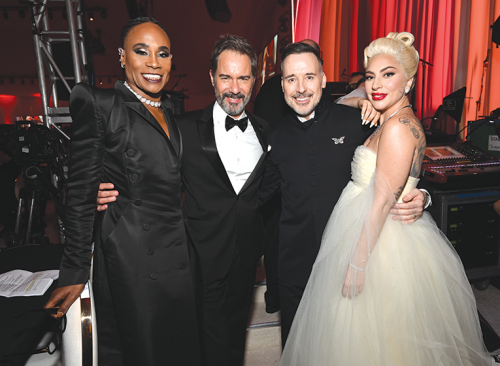 Elton John joined via satellite from his rescheduled Farewell Yellow Brick Road tour stop in Lincoln, Nebraska, to express his appreciation for their support and treat the crowd to a special performance of “Your Song” and “Goodbye Yellow Brick Road.” Guests were also treated to Limited Edition Elton John Eyewear “GOLD DUST” frames sold exclusively at Walmart in partnership with Elton John AIDS Foundation, to wear alongside Elton during his live-streamed performance. Capping off the evening, guests were treated to a full performance by Carlile and a duet with surprise guest artist, Jake Wesley Rogers, who covered Elton John’s classic song, “Rocket Man.”

The 2022 Academy Awards Viewing Party aligns with the 30th anniversary of the Elton John AIDS Foundation, and also marks the foundation’s return to live events. Since the gala’s inception in 1992, the party has supported the foundation’s efforts by raising more than $86 million for its lifesaving programs. All funds raised support the foundation’s network of partners and local experts across four continents to challenge discrimination, prevent infections and provide treatment, as well as influencing governments to end AIDS.

“I’m so grateful to my friends Lady Gaga, Billy Porter and Eric McCormack for joining David in hosting such an incredible evening, and of course Brandi Carlile for bringing down the house with an electrifying performance,” John said. “Most of all, I’m thankful to all who attended and participated to ensure that we can continue our lifesaving work to end AIDS. I could feel the love and support all the way from Lincoln, Nebraska!”

The Wallis welcomes Neiman Marcus executive to board