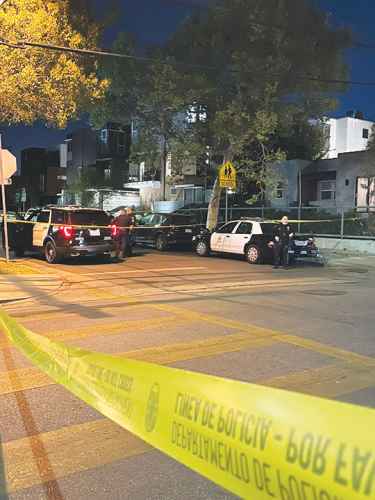 Officers formed a perimeter after the shooting but were unable to locate the suspect. The gunman was arrested on March 23. (photo courtesy of Melrose Action)

A 21-year-old man was taken into custody in downtown Los Angeles on March 23 and charged with attempted murder for shooting and injuring a victim on La Brea Avenue last week.

The suspect, Saalih Mousa, is being held on $1 million bail at the Men’s Central Jail and is awaiting his next court appearance on April 8. He was arrested at an undisclosed location by members of the LAPD Operations West Bureau/Federal Bureau of Alcohol and Firearms Gun Violence Reduction Task Force.

Mousa is accused of shooting a victim on March 21 who saw him harming a dog on the balcony of an apartment in the 700 block of North La Brea Avenue, near the intersection of Willoughby Avenue. The witness, who was on the sidewalk, yelled at the suspect to stop striking the dog and let it go free, police said. The suspect allegedly yelled back, pulled out a gun and fired. The witness was struck once and is recovering.

The suspect fled from the apartment before officers arrived and authorities were unable to locate him. They determined the gunman was the boyfriend of a woman who lived in the apartment.

Police did not release information about how they located the suspect. On March 23, officers also arrested Mousa’s girlfriend, Athena Mansour, 20, who was with the suspect at the time of his arrest. She was charged with being an accessory after the fact for allegedly having knowledge about the crime and was released the following day on $500,000 bail. Mansour is expected to return to court on July 21.

Anyone who witnessed the incident or has information is urged to call detectives with the Wilshire Division’s Major Assault Crimes unit at (213)922-8205. During weekends and off-hours, call the LAPD’s hotline at (877)LAPD247.

One in custody for WeHo robbery