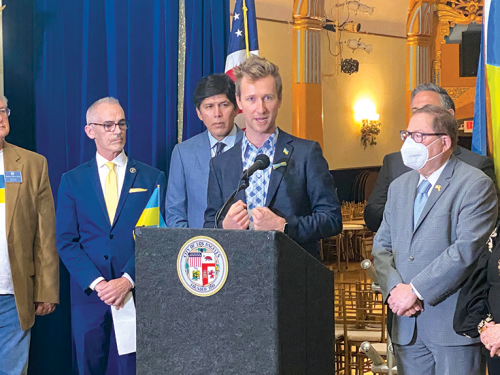 At a March 8 press conference announcing a resolution unanimously condemning the Russian attacks against Ukraine, Los Angeles City Council members pushed a recommendation that would make the Ukrainian capital, Kyiv, a sister city. The event was held at the Ukrainian Culture Center in East Hollywood.

For Councilman Paul Koretz, 5th District, the situation is personal.

“What’s happening in the Ukraine right now hits close to home for me,” Koretz said. “My mother’s family fled Kyiv 100 years ago to avoid the Russian pogroms. And I’ve been sick to my stomach seeing the photos of innocent men, women and especially children who have been murdered in this invasion. An 18-month-old boy killed by the shelling. The 6-year-old girls shot to death in a car. A 14-year-old boy bleeding to death after being hit by a shell fragment. All pointless, senseless, useless deaths at the hand of a megalomaniacal madman.”

Making Kyiv a sister city would allow Los Angeles to provide resources to Ukraine, such as ambulances and fire trucks that were retired from service.

According to Council President Pro Tempore Mitch O’Farrell, 13th District, it would take time for the impact of the assistance to be felt in Kyiv.

“It’s a process,” O’Farrell said. “I think under the quickest of all circumstances … I would imagine that the process would take at minimum a year, and that would be quick. There is a lot of work to be done. But I think even the gesture of initiating it is going to send a strong message.”

O’Farrell previously worked on the sister city agreement with Beirut, Lebanon, in 2006.

He added that the city needs to consider how it might help with refugees from Ukraine. “We need to think ahead about the refugee crisis that’s coming our way, and how we can temporarily or permanently welcome displaced Ukrainians from this current invasion,” O’Farrell said.

To the Ukrainian community in Los Angeles, the sister city proposal and having Los Angeles become a hub for refugees is a vital measure.

“Our diaspora, the community of L.A. at large … they have been reaching out in droves saying, ‘We can help you. We stand with you,’” Ukrainian Culture Center Vice President George Wyhinny said. “If only we can get [the refugees] here.”

O’Farrell and Koretz said they believe everyone should be invested in helping the Ukrainian people.

“The people in the 13th district should care about everyone else,” O’Farrell said. “This is a city of immigrants. [Los Angeles] is the location of the largest Ukrainian diaspora anywhere else in the world. The Ukrainian people are our neighbors, our friends.

“It’s part of Los Angeles to care about others, since we are an international city and a destination from across the world,” O’Farrell said.

“Everybody should care, not just for Ukraine, but for the entire world,” Koretz said. “If a bully like Putin can provoke war and just keep going, it could be another 1930s Nazi experience all over again. We know that in advance. We can’t let it happen. The world has been united in its response, and it just has to keep getting stronger.”

Speaking in the spirit of unification, Daria Chaikovsky, president of the Ukrainian Art Center, struck a note of hope at the press conference when she recited an English translation of the country’s national anthem.

“Glorious spirit of Ukraine, through century stays ignited,” Chaikovsky said. “Blessed by longing for a liberty, we shall stand united. Like the morning dew in rays of sunshine, our foes will perish. Together, brothers, lead and prosper in the land we cherish. We’ll lay down our souls and bodies for desired freedom, and we’ll prove that we are a nation of the Cossack people.”

WeHo cul-de-sacs could be developed