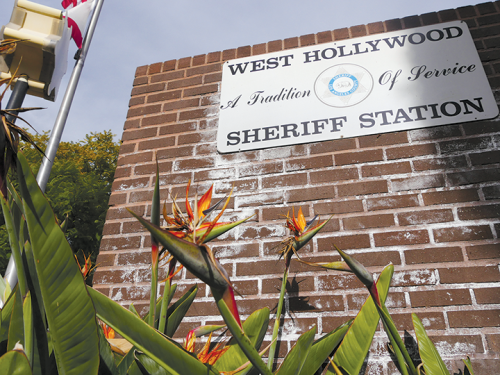 The city of West Hollywood is considering options for public safety and its contract with the sheriff’s department. (Beverly Press/Park Labrea News file photo)

The city of West Hollywood is considering cutting funding to the sheriff’s department. The issue was a topic of discussion at the city’s March 14 Public Safety Commission meeting. The commission was founded in 1989 and works to evaluate and recommend safety mechanisms to the city.

Commissioners on the panel expressed their own concerns and suggestions during the meeting.

“The L.A. Sheriff’s Department monopoly over public safety is not in service of all of our shared values to increase that feeling of safety,” Commissioner Nika Soon-Shiong said.

Shiong argued that while studies have shown that crime has not increased in the city, crimes are underreported because of community distrust of law enforcement.

Commissioner Robert Oliver, meanwhile, said that any policy recommendations that the commission makes will come from a place that takes the city’s diverse population into account.

“The ultimate goal should be a more equitable society and that will lead to fewer crimes committed,” Oliver said. “I support whatever policies make that possible. What we’re doing now, just is not working. I want us to dismantle and examine historic and systemic inequality, racism, sexism and the growing wealth gap, and the policies that we create today will determine the society that we live in 10, 20, 30 years from now.”

Oliver went on to say that the tone of public discourse should keep these societal issues front and center.

During the public comments section of the meeting, Yola Dore expressed respect and admiration for the sheriff’s department’s service to the community.

“I love this city, and I’m sure many of you do or you wouldn’t live here,” Dore said. “I think we are progressive … I think we have many good things on the table, but [we can’t] turn it upside down. [We don’t need to tell] all these officers that we don’t value your service.”

Dore suggested that sensitivity training and community policing could help reduce crime in the city.

Others also expressed support for the sheriff’s department, including Patrick Blood.

“I’ll say that my interactions with the L.A. sheriff’s [department] in Weho have been incredible,” Blood said. “I have been a victim of domestic violence within the city limits, and the West Hollywood [deputies] dealt with it incredibly.”

“Taking away funding from the sheriff’s [department] now seems rushed, not carefully thought through, considering the implications it has on the residents,” Blood added.

West Seegmiller said that it is about the quality of the deputies themselves.

“If we keep police on board, they need to be good police,” Seegmiller said.

Adam Darvish discussed the issues with crimes near the clubs along Santa Monica Boulevard and Sunset Boulevard, suggesting that cameras might help.

“The city of Beverly Hills has cameras all over the residential areas at intersections, we just need a handful of them in the areas that are congested with bar customers and at two in the morning, end up in front of our homes a block above the strip,” Darvish said.

Ambrose Brooks, a resident of Hollywood, was disturbed by the idea that some commentors were arguing for increased funding to law enforcement.

“I want to remind to the commission that the L.A. County Sheriff’s Department has as $3.4-billion budget every year, so they are not lacking in funds,” Brooks said. “A lack of [deputies] in our county is not the cause of any hypothetical rise in crime, in fact there is data to show that there is not a rise in crime here in L.A. County.”

The commission meeting served as a preamble the West Hollywood City Council’s March 21 meeting, at which public safety is on the agenda. Since the summer of 2020, when protests against police brutality occurred throughout the country and led to weeks of demonstrations in West Hollywood and surrounding cities, the role and funding of law enforcement has been an intense debate. Compounding the issue has been a rise in the county and the city’s homeless population.

The West Hollywood Sheriff’s Station responded to the public’s concerns.

“The West Hollywood Sheriff’s Station’s number one priority is for the safety of our community. We have always worked well with the city and our community to provide the best service to our community and will always continue to that endeavor,” the department said in a statement.

For information on how to attend and participate in the March 21 West Hollywood City Council meeting, visit weho.org.