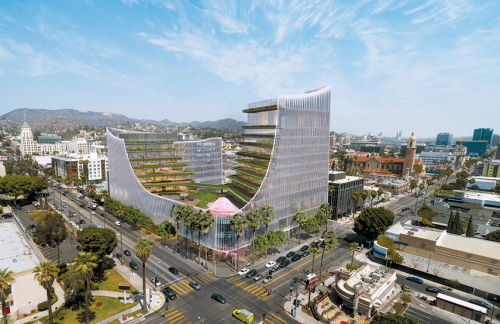 CMNTY Culture on March 18 announced plans for an inventive new real estate development project in the heart of Hollywood – a 500,000-square-foot project dubbed CMNTY Culture Campus that will be developed with architects HKS and landscape designer Hood Design Studio.

“The entertainment industry is experiencing a time of unparalleled excitement and change, bringing about an opportunity to reimagine the landscape upon which content is created and consumed,” said Lawrence, who owns a nearby recording studio, the Record Plant. “Now, we live in a new era where creatives and their audiences seek opportunities to collaborate and interact, not just in the digital sphere, but in-person. Content creators need a physical epicenter, a place that celebrates their work and the power of community. CMNTY Culture Campus will be a place where creative people will want to hang out with like-minded individuals and experience something special.”

Located on a nearly two-acre site at the corner of Sunset Boulevard and Highland Avenue, the CMNTY Culture Campus was designed to appeal to creatives and the entertainment industry that supports them.

According to the developers, the project will be one of the largest Black-owned enterprises in the area and will bring together all aspects of the industry – from artists and content creators, tech and media companies, agencies and management companies, as well as other entertainment sectors – with the mission to support artistic creation and enrich the Hollywood community.

CBRE will handle leasing for the project.

“We look forward to engaging and partnering with our neighbors as the project moves forward,” said St. John, CMNTY Culture’s CEO. “Their input will be critical as we bring this campus to life. We see this place being an immersive playground for students, artists, creators and innovators of all types while also creating more opportunities in the entertainment industry.”

More about the project will be shared over the coming months.

And they’re off: BH races at the starting gate