Community advocate recognized as Woman of the Year 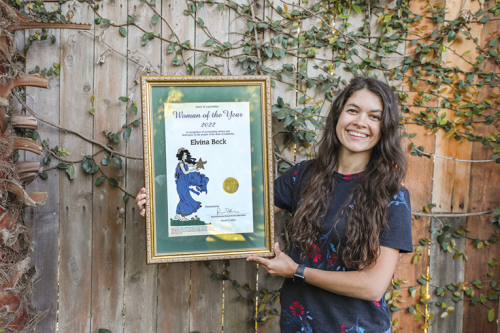 Assemblyman Richard Bloom (D-Santa Monica) has selected community activist and Hollywood resident Elvina Beck as the 50th Assembly District’s 2022 Woman of the Year. Beck received the award in recognition of Women’s History Month and was honored for her accomplishments and contributions.

“Elvina Beck is an exemplary woman who approaches issues she cares deeply about – housing, homelessness and food insecurity – with compassion, heart and fresh ideas. She works tirelessly behind the scenes to uplift others and is very deserving of this recognition as Assembly District 50’s Woman of the Year,” Bloom said.

Beck has served as president of the Central Hollywood Neighborhood Council for the last six years. She has created shared housing communities in Los Angeles and is a founding member of Hollywood Harvest, which has delivered free groceries to at-risk seniors since the onset of the COVID-19 pandemic. With volunteers, Hollywood Harvest delivers 16 tons of food every Thursday to over 700 seniors.

“I am grateful to be named Woman of the Year from a California representative whom I respect so dearly,” Beck said. “Richard Bloom and his team have showed up for our community time and time again, locally and in Sacramento. As the last honoree under his term, I will continue to serve those in need to my highest capacity.”

The Woman of the Year event was founded in 1987 by then-Assembly members Bev Hansen and Sally Turner in recognition of Women’s History Month. For information, visit a50.asmdc.org.

Thank you for celebrating women’s accomplishments