In honor of Women’s History Month, we are profiling dynamic women who make significant contributions to our community. 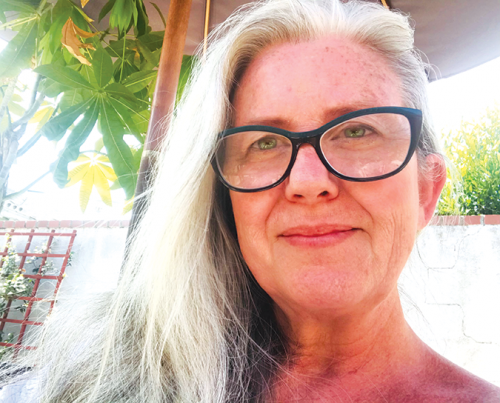 Patty Horton is a born and raised Angeleno who’s made a career out of giving back to the community. Specifically, Horton helps keep California’s 28th Congressional District buzzing along, working as U.S. Rep. Adam Schiff’s campaign director. Politics was not always the plan for Horton, however.

“I went to an arts school, because I was going to be an artist, and that’s how you end up in politics,” Horton said with a laugh.

Horton still draws in her spare time, but moving into civic engagement was a natural progression. She credits her Irish family with helping her to navigate the public sphere.

“The Irish are very much about getting together, that’s how we were raised. It was always about the community around you,” Horton said. “That’s how I grew up, so that’s how my brain works.”

This sense of community led her to politics.

“I like to hear what drives people,” she said. “I think we are all happier when we are engaged with each other.”

Horton has been on Schiff’s staff since 2001 when he began his career in the U.S. House of Representatives.

“I had been in Colorado for a few years, and I came back, and my dad loved this new guy Adam Schiff, who had gotten elected, and told me I should call him,” Horton explained.

“I’m the person who manages the campaign office and does everything political,” she added.

As a single mom with three sons, Horton said juggling her busy home life and working in the political arena has been a “motivating” experience.

Horton has also had a number of high school interns who have gone into public service. For young women wishing to get involved in politics, Horton said that they should start locally.

“I think one of the problems is we all want to do everything all at once, but if they have a passion for something, start [local],” she said.

“Start with what you care about,” Horton added. 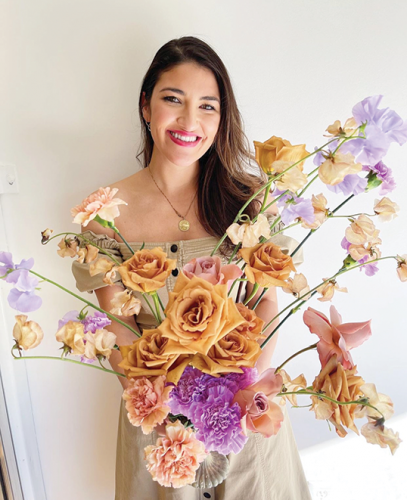 When Emily Jilg started the Emily Jilg Co., she didn’t intend for floral arrangements to be part of the business plan. However, her life took her in directions she didn’t plan.

Her major at the University of Missouri, Columbia, was strategic communications in journalism, and she began her career at the Los Angeles Times. After six years, she was anxious to branch out on her own and bridge her love of food and aesthetics with business.

Starting with her own line of spices, Jilg launched her business at the end of 2019.

“This kind of blossomed into an all-encompassing experience about enjoying your life,” Jilg said. “COVID happened when I was about 10 days into my business. So, I pivoted into creating a really lovely experience for people in their homes.”

As vaccinations rolled out, Jilg expanded her business.

“I started to do these private chef work parties with groups of eight to 12 people … very curated menus and a full experience that also included florals. I started to get more into that sector, and suddenly I was finding myself getting more requests for floral design than anything else,” Jilg explained.

She expressed particular pride in a “desert disco” arrangement she produced for a recent party in Palm Springs.

“[My client] walked in, and she was floored,” Jilg said. “She didn’t know how I could make a disco ball out of flowers.”

With the success of her floral arrangements – @bloomsby.Emily on Instagram – Jilg knew she had to bring the business under the umbrella of her company, Emily Jilg Co., which will open a brick and mortar in La Canada next month.

“We will have flowers, we will have fancy olive oils, we will have pretty vases and nice curated candles,” she explained, likening it to the fictional Rose Apothecary on the television series “Schitt’s Creek.”

In addition to featuring her own items, Jilg will also sell products crafted by artisans throughout Southern California.

Being a millennial woman in the workforce has had unique challenges for the young businessowner.

“I’m 30, owning my own business, having a space and employees … I’m not playing business, I’m actually doing it,” Jilg said.

She said other women looking to make their way into the entrepreneurial world should not be intimidated by hard work and perceived or real obstacles. They should also not be afraid to make mistakes.

“You have to sometimes experience a little bit of failure to see what success looks like,” Jilg said.

Emily Jilg Co. will be located at 831 Foothill Blvd., La Canada Flintridge. Customers can order the company’s arrangements for delivery at bloomsbyemilyjilgco.com. 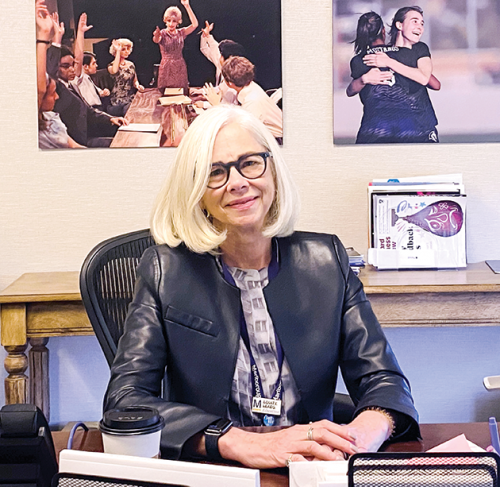 The Marlborough School is one of the most respected girls’ education institutions in the Los Angeles area, and Head of School Dr. Priscilla Sands has been in charge of maintaining its high academic standards for the last seven years. At the end of this semester, Sands will retire, marking the end of another chapter in a storied life.

“Many of the kids came from working class families, and they took theater as an elective because it would irritate their parents who wanted them all to take business, and actually a few of my students went on and had nice TV careers,” Sands said. “It really gave them the strength to say to their parents, ‘I want to pursue this.’”

She later obtained a Master of Arts from Villanova University and a Doctorate from the University of Pennsylvania. Prior to joining Marlborough, Sands was the assistant head of school at Agnes Irwin School in Philadelphia and led the Springside School, also in Philadelphia.

Sands said working in education is a logical step for a person with a theatrical background.

“[Theater] prepares you in ways that I think are more helpful than anything else. I have seen really smart, fabulous people flounder at the speaking part and the narrative story [part of the job],” she said.

Sands describes her current role as being like a mayor of a small town.

“I have to be attuned to everyone’s needs and know what is happening,” she said.

“We are living in an unprecedented time. What I have noticed is that our students are way ahead of all of our thinking and all of our planning,” Sands said.

She said her goal is to create programs and an educational environment that is “preparing for their future, and not our past.”

For Sands, this includes being inclusive with all students, no matter how they identify or why they may choose to go to a girls’ institution.

“[The students] are real activists. They hold us very accountable for the environment, for race, for gender, and we’ve had to adapt. I said [to our staff], ‘We have to adapt to this [and] show our students that we see them,’” Sands said.

She told a story about a transgender student she said solidified her faith in the next generation’s future.

“I was talking to my advisees, and I had a trans boy in my group, and I talked about having come from a co-ed school,” she explained. “I made a glib comment that I was so glad to be back at a girl’s school, and that this is where my passion is. As they were filing out, I said to this boy, ‘Could you just stay for a few minutes. I am so sorry, I have three sons, I do like boys, but I am a feminist. I didn’t mean to exclude you,’ and he said, ‘You didn’t exclude me. You included me by assuming I’m a feminist.’

“And I am. That’s why I wanted to stay at Marlborough,” Sands added.

Not just another pretty face