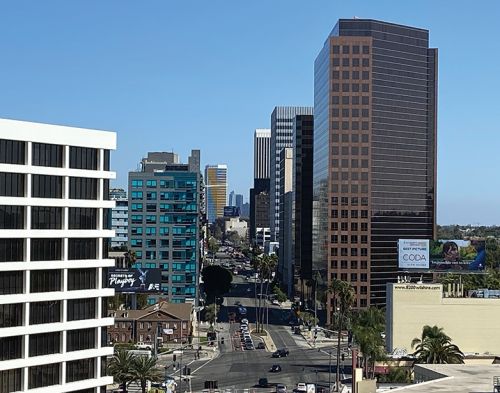 Five candidates are vying to represent the newly-formed 5th District, which includes this stretch of Wilshire Boulevard. (photo by Edwin Folven)

Six candidates running for the 5th District council seat in 2022 outlined their viewpoints during a candidates forum held on March 9 by the Mid City West Neighborhood Council.

Irwin announced on March 16, via her campaign’s Facebook account, that she was ending her run for City Council after being informed by elections officials that she did not submit enough qualified signatures of registered voters. The other five candidates will appear on the June 7 Primary Election ballot. If no candidate receives more than 50% of the vote, the two who receive the most votes will move on to the Nov. 8 General Election.

Most of the candidates live in the local portion of the district, which stretches from Hancock Park and the Miracle Mile to Bel-Air. Yaroslavsky resides in South Carthay, Epstein was a longtime Fairfax District resident who now lives in Carthay Square, Basler lives in Beverly Grove, Biblarz grew up in the Pico-Roberson District and now lives in the Mid City West area, and Yebri is a Westwood resident.

The candidates were asked how they would address different issues affecting Los Angeles and the 5th District, including homelessness and affordable housing. Each responded with unique perspectives on what they agreed was one of the most pressing issues affecting the city.

“We need more housing at price points that people who work in L.A. can actually afford. And we need to be building housing near job centers and transportation that people who live in that housing actually use,” said Yaroslavsky, a former land use attorney and policy advisor to Los Angeles County Supervisor Sheila Kuehl. She is also the daughter-in-law of former county supervisor and Los Angeles City Councilman Zev Yaroslavsky. “I believe strongly in the need for us to update our community plans to decide as communities where we’re going to put that density and really prioritize affordable and workforce housing.”

Epstein, a public policy analyst and former chair of the Mid City West Neighborhood Council, said the lack of affordable housing and homelessness are inextricably linked, and there needs to be more housing constructed so people don’t fall into homelessness in the first place.

“You have to understand that the lack of housing production in CD5 is fueling gentrification and displacement all over the city,” Epstein said. “We live in a jobs-rich and service-rich community and we put walls around it by not building a sufficient amount of housing for different types of income levels and different types of families.”

Yebri, an attorney whose private law firm is based in Century City, said there are too many hurdles in the city permitting process that perpetuate the lack of housing stock.

Biblarz, an attorney and activist, said a new approach to building affordable housing is needed.

Basler, a community organizer and businessowner, added that the city allows too many housing developments for wealthy tenants at the expense of housing for people with lower incomes.

“There’s gridlock in building the affordable housing because of the corruption that is going on,” she said. “We have too much luxury development and not enough affordable, and that has to stop. We are never going to get anywhere with the gridlock that we have.”

In terms of homelessness, the candidates were asked about how the city should go about removing encampments. They each stated that encampments should only be removed after housing is secured for people living in them, and that services are needed once people are placed in units.

The candidates also agreed that the city needs to be taking more steps to address crime, and cited a rise in violent incidents throughout the city. Epstein presented the idea of creating a permanent space for police in the Melrose area, where numerous violent crimes have occurred during the past three years. The candidates all said police reform and maintaining public safety can be accomplished together.

“I think the future of policing in L.A. is leaner and more efficient and more tailored to actually solving crime and community policing,” Epstein said. “We need to move our police officers out of armed traffic stops and out of responding to our unhoused neighbors, and responding to hate crime, violent crimes and issues that we care very deeply about.”

“We all deserve to be safe in our communities. It is the job of government to make sure people are safe, so we need a well-staffed, well-trained and reformed police department,” Yaroslavsky said. “Those are not mutually exclusive things and making sure officers are focused on crime prevention and solving crimes is key.”

“What we need to think about public safety as a broad concept, of course, we know policing is one element,” Biblarz said. “What we know works is not blanket calls for more policing across the city.”

“We have to have [officers] focus on core responsibilities, guns and gangs that are exploding out there,” Yebri added. “We’ve got to be sure police officers do their job the right way with better recruiting training, accountability and oversight. But the fact is we need more police officers.”

“I think we need to look at the systemic issue of crime,” Basler said. “[We need to] train officers better and have our schools better train people for jobs and get the minimum wage up so people aren’t having to live lives of crime.”

The candidates also stressed that changes to the city’s environmental policy are needed and should come in many forms. Epstein said a solution would be to create a multi-modal transportation system with more bike lanes and better bus service.

“We need to make transit free. We need to invest in clean energy. We have a great goal for the city to get to 100% renewable energy by 2035, but now we have to do it,” Epstein said. “That looks like weatherizing homes, new energy production and transmission, and so much more.”

Biblarz said single-occupancy vehicles are one of the main drivers of urban pollution and advocated for more housing to be located close to public transportation hubs to reduce the need for using cars.

“It’s about looking for opportunities sites for investments in transit, specifically rapid bus lanes, and a well-connected infrastructure,” Biblarz said. “It’s also about expanding successful DWP pilot programs. The DWP electrical appliance subsidies are very successful. And lastly, I think we would be remiss not to acknowledge that we need to be calling out environmental racism loudly.”

Basler called for an end to petroleum use and a switch to electric power.

Yebri also cited the importance of moving toward alternative energy sources as soon as possible.

“We have to accelerate our permanent transition to electrification,” Yebri said. “Los Angeles needs to be a world leader when it comes to solar distributions, storage and charging stations on the Westside, [where there] aren’t enough. That’s really the future. We have to make those investments now.”

Yaroslavsky, who has worked on environmental policy for Kuehl, added that there are many things that should be done, from building housing near transportation hubs and creating more bike lanes to reducing carbon emissions.

“We need smarter land use planning and policies that put density in housing near job centers and transportation,” Yaroslavsky said. “We have to be putting this housing near where people work, and near the transportation that people are going to use. That’s the best way we can cut greenhouse gas emissions that is actually within the purview of the council office.”

The Mid City West Neighborhood Council has posted a recording of the forum that can be viewed by visiting midcitywest.org/candidates. The public can also hear from the candidates again at upcoming forums. Yaroslavsky, Epstein, Biblarz, Basler and Yebri will participate in a forum on March 20, at 1:30 p.m. at Temple Isaiah, 10345 W. Pico Blvd. The deadline to RSVP to attend the forum is March 18 at 2 p.m. Visit tfaforms.com/4964413.

The Hancock Park Homeowners Association is also holding a virtual forum with Yaroslavsky, Yebri and Biblarz, the three candidates whose campaigns have raised the most money, according to HPHA president Cindy Chvatal-Keane, on March 21, at 7 p.m. To RSVP, visit us02web.zoom.us/j/81865479225.

Bill could be a lifeline for news outlets

Thanks for covering the CD5 race, particularly since the Beverly Press seems to be the only news outlet doing so.
However, I was disappointed in the candidates remarks – leading me to hold off supporting any of them. Their remarks were canned responses to the few issues raised at the debate. More importantly, there was not a single candidate who said a single word about how they would go about funding any of their proposals. And, there are many more issues to be addressed – not only the hot-button issues of homelessness and the police/crime. What about city services that are woefully behind schedule (if they’re scheduled at all); transportation; budget; and more.
Until I hear any of them addressing these issues in a meaningful way I’ll keep waiting for one of them to provide a good reason why I should vote for them.