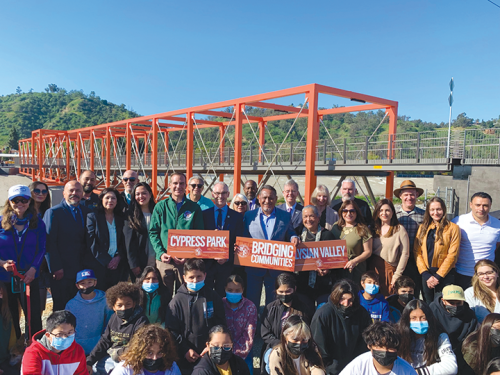 The $27.2-million bridge has been long awaited and provides a critical connection for pedestrians and bicyclists on both sides of the Los Angeles River, O’Farrell said. It is the third new bridge constructed over the river during O’Farrell’s tenure, following the openings of the North Atwater Multimodal Bridge and the Red Car Pedestrian Bridge in 2020.

“This new bridge is the result of perseverance and persistence from everyone involved over a 30-year period,” O’Farrell said. “This decades-long journey began with former Councilmembers Mike Hernandez and Ed Reyes, their staff members and countless neighbors in Elysian Valley and Cypress Park on either side of the Los Angeles River. Over the past eight years, it has been my honor to take the baton in bringing this collective effort to completion.”

The Taylor Yard Bridge project connects the Elysian Valley community to the planned Taylor Yard G2 River Park on the east side of the river. The bridge’s south entrance is adjacent to the Los Angeles River Greenway Trail between Altman Street and Dorris Place, and the north entrance is near 1555 N. San Fernando Road.