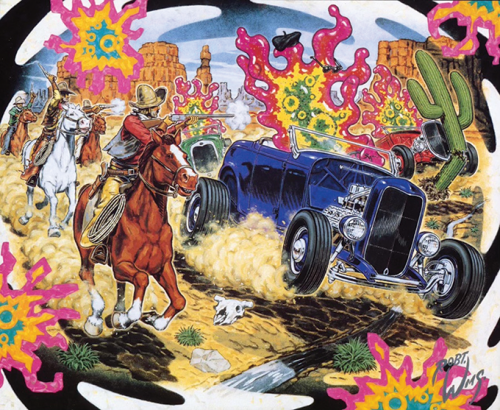 The Porsche race car on display at the Farmers Market with be wrapped in this artwork from Robert Williams. (photo courtesy of Gary Twinn)

Contemporary artist Robert Williams’ work will be unveiled on a Porsche 718 GT4 RS race car and a selection of luxury timepieces during a special event on Saturday, March 26, from 5-10 p.m. at the Market Tavern at the Original Farmers Market.

Produced by the AutoMoto Film & Arts Festival, the event will be highlighted by the debut of TRG Racing’s special edition #66 Porsche 718 GT4 RS Cayman Clubsport, covered with one of Williams’ iconic artworks. The same Williams art, along with other pieces from his collection, will also be featured on limited-edition timepieces by B.R.M. Chronographes.

Market Tavern owner Gary Twinn said the event symbolizes the past and present of auto racing, and also pays tribute to the Farmers Market’s automotive history. The Porsche will be displayed with one of the midget race cars that once competed at Gilmore Stadium, which was located near Fairfax Avenue and Beverly Boulevard on the A.F. Gilmore Company property from 1934-1952. The Gilmore Company was a major oil producer in Los Angeles during the early days of the automobile and the land where the Farmers Market and surrounding attractions are now located was once part of a large oil field. Twinn said the midget race car was loaned for the event by Hank Hilty, who recently retired as president and CEO of the A.F. Gilmore Company.

“There’s definitely a connection to the history of the Farmers Market with the Gilmore racing stadium. The organizers thought the tie in with Gilmore and its history with racing in Los Angeles was great,” Twinn added. “We’ll have the old and the new. We are definitely grateful to Hank Hilty for allowing us to display this car.”

Williams, a painter, cartoonist and founder of Juxtapoz Art & Culture magazine, was among a group of artists who produced Zap Comix. A self-described “conceptual realist,” Williams was involved with some of the most significant and influential contemporary art movements.

“The impact that Robert Williams has had on American culture has truly been profound,” AutoMoto Founder Fred LoBianco said. “We hope this will help bring his works to new audiences, through automotive and timepiece adaptations.”

Twinn said the event was made possible through a collaboration with an old friend, Scott Parker, who is with the AutoMoto Film & Arts Festival. Twinn said they are both fans of vintage British motorcycles and racing, and the Market Tavern is the perfect place to hold the event in Los Angeles.

“With Scott being a friend of mine, he wanted to give us support, and we were thrilled to host such an event,” Twinn said. “It’s pretty exciting. It’s going to be a great event.”

Executives from participating brands will participate in the unveiling, as well as TRG driver Derek DeBoer, who will display the Porsche 718 GT4 at races throughout the 2022 Fanatec GT World Challenge America Series.

The evening will also include a live performance at 7 p.m. by Market Tavern favorites Long Shadows, which features Twinn on vocals. The Long Shadows are also playing on Friday, March 25, at 9 p.m. at EB’s at the Original Farmers Market. The Jimbonaires open the show at 7 p.m.