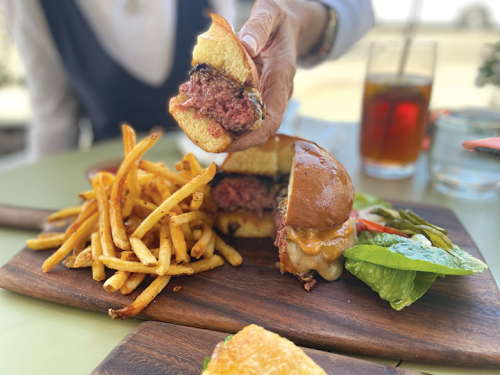 Be sure to order the A.O.C burger with melted Mahon cheese for elevated, savory flavors. (photo by Jill Weinlein)

James Beard award winning chef Suzanne Goin and business partner Caroline Styne took the former Hamburger Hamlet in Brentwood and turned it into Tavern a few years ago. Recently, they transformed the space into a new A.O.C. Restaurant.

I joined two friends to explore the lunch menu at the newly designed space. There are a few tables along the wall in the bar area, but now most of the indoor tables are to the left of the entrance and there is a small semi-private dining area that fronts the windows looking out onto the street.

We were seated outside at a table on the sidewalk and ordered A.O.C.’s Farmer’s Plate. It arrived with thick slices of grilled bread and a scoop of burrata with an olive oil drizzle and coarse cracked pepper on top. Mild muhamarra puree of roasted red bell peppers, walnuts, pomegranate molasses for a touch of sweetness and breadcrumbs, and a chickpea puree were topped with an array of roasted vegetables that included long baby carrots and small florets of Romanesco broccoli.

A cheese board featured three different selections, candied walnuts, dried apricots and a fruit spread. The first choice was a popular sheep cheese from the Croatian Island of Pag. It offered a pleasant aroma and a slightly salty, savory and tangy flavor. The second was Pleasant Ridge, an alpine-style cheese made from cow’s milk. It too was slightly salty and offered a fruity flavor. The third cheese was mélange brebis, an artisanal pasteurized Basque ewe and goat milk cheese that looked and tasted like a double cream brie.

We tried the Moroccan chopped chicken salad that had kale and radicchio leaves, chickpeas, thinly sliced carrots, golden raisins for a touch of sweetness and chopped almonds for a crunch. It also had a light cilantro charmoula flavor profile that is popular in Northern Africa.

We enjoyed the salad so much, that we ordered the citrus salad with slices of blood orange, pieces of avocado, arugula, thinly sliced maxorata goat cheese from Canary Island, chopped Spanish Alorena olives and crunchy Spanish quicos that taste similar to corn nuts.

We sampled the young broccoli sandwich served on freshly baked soft focaccia layered with burrata and bagna cauda. Served like a caprese sandwich, but made with broccoli instead of tomatoes, it offered a garlic and anchovy flavor that tastes similar to a Caesar dressing.

My friends said that we must order the A.O.C. burger on a soft brioche bun and layered with a delicious Mahon cheese. Mahon is a cow’s cheese named after the town and port of Maó on Menorca island off the Mediterranean coast of Spain. It’s salty and fruity with a hint of sweetness. The bun was topped with romesco aioli and sweet and savory balsamic onions.

We finished with an ethereal panna cotta with sliced citrus and creme fraiche.

For those dining during weekend brunch, menu favorites include dungeness crab omelets with haricot verts, scallion salsa, burrata and crème fraîche; and wood-oven baked eggs with grilled toast. Goin’s Spanish fried chicken and cornmeal waffle with chile-cumin butter, Jamon serrano and maple syrup is also on the menu. Another savory item is A.O.C brioche with melted gruyere frisée, prosciutto and a sunny-side up egg on top. For something sweet, vanilla bean brioche French toast served with Meyer lemon curd and an array of Harry’s berries is offered.

Chef Goin visited our table and shared that A.O.C. recently hosted two nights in which proceeds were donated to support World Central Kitchen and its relief efforts in Ukraine. At both locations in West Hollywood and Brentwood, Goin and Styne donated 100% of dinner takeout sales to the cause.