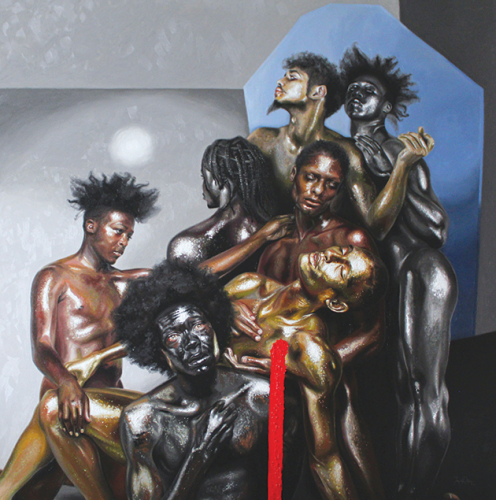 Travion Payne’s “Heteronormative: Death of the Golden Child” is on display at the West Hollywood Park Parking Structure. (photo courtesy of the city of West Hollywood)

The 9-foot-by-9-foot temporary vinyl mural will be on display through September 2023. The “golden child” in the title of the artwork refers to a popular, noteworthy person whose admiration stems from outside admirers’ infatuation with talent, looks or other attributes. While a person may appear strong on the outside, internally, they may be more vulnerable, more anguished, more troubled. Through the painting, Payne hopes to bring attention to the fact that Black and LGBTQ individuals face an increased risk of suicide due to societal factors and other complications. In the painting, the “golden child” is a reflection of a reality that many people face today.

Payne is a Black artist from Houston, Texas, who recently earned a degree in psychology. His passion for creating art led him to utilize his background in psychology to create thought-provoking paintings that emotionally influence viewers. He enjoys painting portraits using vibrant colors and textures to add depth to the meaning behind each artwork. His art sheds light on controversial topics that will give insight into the issues that Black men face, such as mental illness in correlation with religion, colorism, homophobia and fragile masculinity within the Black community.

Although the paintings feature predominantly Black men, the themes apply to other groups of people. Payne’s paintings also include hidden symbolism, which intertwine with the numerous meanings behind each painting. Lastly, his paintings fuse apparent contradictions, seeking to heighten the experience of the spectator by creating immersive portraiture. Payne’s work explores an array of human emotions that are associated with different facial expressions.