Police released photographs of the suspect wanted for the attempted sexual assaults. (photo courtesy of the LAPD)

Updated at 11 a.m. on Feb. 18: Police arrested a male suspect in connection with the sexual assaults at approximately 1:30 p.m. on Feb. 17 in the 600 block of Fifth Street in downtown Los Angeles, LAPD spokeswoman Meghan Aguilar said. A citizen recognized the suspect from media reports and called police, she added. Detectives are continuing their investigation and plan to present the case to the Los Angeles County District Attorney’s Office on Monday. Aguilar did not have any further information about the suspect, and said more details will be available once charges are filed.

Detective Brent Hopkins, with the LAPD’s West Bureau Sexual Assault Detail, said the first incident occurred at approximately 12:30 p.m. in the 800 block of North Vista Street. The suspect, who Hopkins said appeared to be homeless, randomly targeted a female victim walking alone. The suspect placed his arm around the victim’s neck and walked her to a secluded location on the side of a house where the attempted sexual assault occurred, Hopkins said. A security camera captured video of the suspect leading the victim onto the property and down the driveway. The suspect is Black, 20-30 years old and was wearing a black and purple striped shirt, gray sweat pants, sandals and a hat.

“She was walking down the street minding her own businesses when he came up and grabbed her,” Hopkins said. “[On the video] you see he’s leading her and she’s under duress. He dragged her into a driveway area and made threats, but she was able to break free and run out into the street and flag down a good Samaritan, who took her to the sheriff’s station in West Hollywood.” 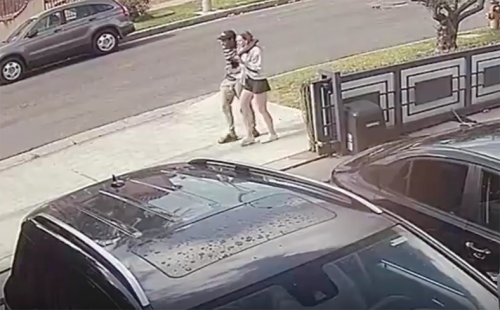 A security camera captured footage of the attempted sexual assault suspect walking a victim to a secluded location on Vista Street. The suspect was wearing a black and purple striped shirt, gray sweat pants, sandals and a hat, and was carrying a black bag. (photo courtesy of Melrose Action)

Sheriff’s department officials notified the LAPD because the alleged crime occurred in the Wilshire Division’s jurisdiction. Shortly after, West Hollywood deputies received a call about an attempted sexual assault in the 7600 block of Hampton Avenue, approximately 12 blocks from the site of the first incident.

Lt. Bill Moulder, with the West Hollywood Sheriff’s Station, said the incident on Hampton Avenue involved a male suspect who confronted a female victim outside her apartment and pushed her inside the unit. The victim screamed and the suspect fled, Moulder added. Hopkins confirmed detectives from both agencies are investigating the crimes and have made finding the suspect a top priority.

“The description was similar enough to lead us to believe it was the same suspect,” Hopkins added.

The detective said patrols have been increased in the neighborhoods where the sexual assaults occurred and undercover officers and detectives from other units are searching for the suspect.