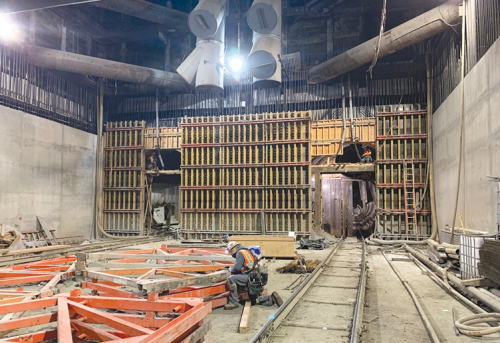 The tunnels at the Wilshire/La Cienega station are being prepared for the arrival of the twin tunneling machines later this year. (photo courtesy of Metro)

Metro is advising about ongoing construction in February on the Purple Line Extension subway project.

On section one, work is occurring in the tunnels and at the future Wilshire/La Brea and Wilshire/Fairfax subway stations. At Wilshire/La Brea, construction is primarily occurring underground and in staging yards on the north and south sides of Wilshire Boulevard. The work includes the construction of appendages, which are rooms and passageways adjacent to the main station. The work requires intermittent lane closures on Wilshire Boulevard between Detroit Street and Highland Avenue through April 4. Sycamore Avenue will also be closed immediately south of Wilshire Boulevard.

In the Miracle Mile, Wilshire Boulevard has been reduced to two lanes in each direction between Ridgely Drive and Curson Avenue around a K-rail work zone being used for work in the subway tunnels. The lane reduction will be in place for approximately two years.

In Beverly Hills, construction is ongoing at the Wilshire/Rodeo subway station, which is part of the second phase of the Purple Line Extension project. Sidewalk and lane reductions may be necessary around construction staging areas near Wilshire Boulevard and Reeves Drive.

At the Century City/Constellation station, work is occurring near Constellation Boulevard and Avenue of the Stars. Crews are relocating sewer and storm drains and excavating the future subway station. Excavation and tunneling support is ongoing within construction staging yards at the site. Partial traffic lane closures will be required on Avenue of the Stars and Constellation Boulevard. Work is anticipated to begin in February to relocate a sewer and storm drain from within the project area, with completion anticipated in mid-2022. Partial traffic lane closures will be required overnight on Avenue of the Stars.

In Westwood, piling work is ongoing near Wilshire Boulevard and Gayley Avenue. Crews are creating a box around the future subway station. Preliminary work is also occurring in Westwood at the Veterans Administration campus, where a station at the western terminus of the Purple Line will be located. The work incudes underground utility relocation and site preparation.