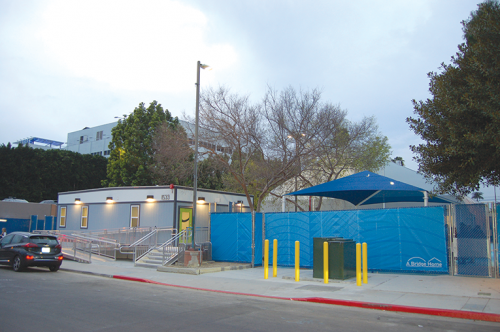 A Bridge Home shelter that opened in Hollywood in 2019 provides temporary housing and services aimed at getting people experiencing homeless into permanent housing. (photo by Edwin Folven)

“Let’s be really clear, not all of the services that city and county residents are paying for are making it to the people who need them the most,” said O’Farrell, who previously called for a full review of the city’s contractual relationship with Los Angeles County. “The city of Los Angeles relies entirely on the county-managed network to get critical services and resources to the most vulnerable. It is quite clear that, at least in my district, we are not getting the full slate of services. We need to find out why, and we need to do better.”

O’Farrell took steps early to implement the A Bridge Home, Tiny Homes and Safe Parking models. The A Bridge Home shelter that opened in Hollywood at 1533 Schrader Blvd. in March 2019 was the second in the city, after a similar site on Alameda Street near Union Station. Since then, over 2,000 A Bridge Home beds have been opened citywide.

Though Los Angeles’ sixth Homelessness Roadmap Report reveals that service delivery to A Bridge Home sites is currently guaranteed through the end of June, recent information shows that service delivery may be lacking, O’Farrell said. Due to the COVID-19 delta and omicron variants, many of the city’s A Bridge Home sites were decompressed or placed under mandatory quarantine per Los Angeles County Public Health Department COVID-19 protocols and procedures. County mental health and substance abuse services have not been available at some sites despite requests from service providers for patient care, O’Farrell said.

The city of Los Angeles does not have a health department, and since 1964 has relied exclusively on Los Angeles County for the delivery of public health services, including mental health and substance abuse services. In October 2020, the Los Angeles City Council adopted O’Farrell’s motion calling for a review of the city/county public health contract dating back to 1964, as well as county public and mental health departments and agencies. The review confirmed that there is no clear method for the city to evaluate if the county’s service delivery is effective, O’Farrell added.