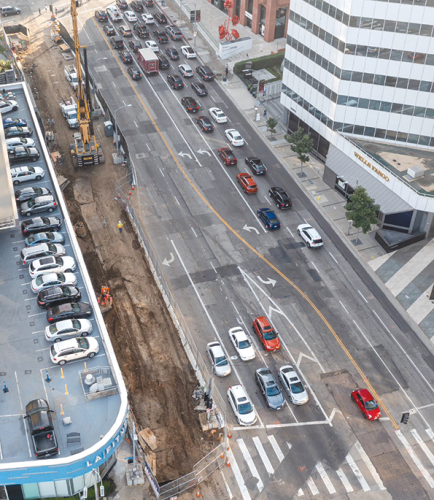 Work is occurring on the western end of the project in Westwood, where subway stations will be located on the VA Hospital campus, and near Wilshire/Gayley. At the VA Hospital campus, crews are relocating underground infrastructure and completing preparation work through April before decking work over the future station box begins in May. The preparation work is occurring along Wilshire Boulevard and Bonsall and Federal avenues. In May, the decking work will require the closure of ramps between the VA Hospital campus and the San Diego (405) Freeway, and more details will be announced.

Piling is occurring at the site of the future UCLA subway station near Wilshire/Gayley. Weekday construction hours are 9 p.m. to 6 a.m., and weekend constructions runs from 9 p.m. on Fridays through 6 a.m. on Mondays. Once the piling is complete in May, decking will be placed above the station box to create a temporary roadway.

In Century City, work is occurring at a future subway station near Constellation Boulevard and Avenue of the Stars. Crews are relocating sewer and storm drains through mid-2022 and excavation of the future subway station is ongoing. Tunneling support is also occurring at the site through the end of 2022. Partial traffic lane closures will be required on Avenue of the Stars.

Farther east at the Wilshire/La Cienega station, station appendage construction is ongoing through 2023. Lane reductions may be necessary on Wilshire Boulevard between La Cienega and San Vicente boulevards. Gale Drive will be temporarily closed north of Wilshire Boulevard through April.

Crews are also building the Wilshire/Fairfax subway station. The sidewalk along the south side of Wilshire Boulevard between Ogden Drive and Orange Grove Avenue will be closed for approximately one month as work near the station entrance progresses. Most of the appendage construction is anticipated to be complete by April.

At Wilshire/La Brea, work continues on a future subway station. Lane closures will be necessary on Wilshire Boulevard near staging areas near La Brea Avenue. Wilshire Boulevard will be reduced to two lanes in each direction between Detroit Street and Highland Avenue through April 4. Sycamore Avenue will also be closed immediately south of Wilshire Boulevard.

From April 22 through July 11, crews will remove decking on Wilshire Boulevard between La Brea and Highland avenues, which will require weekend closures of Wilshire Boulevard. The work will occur from 9 p.m. on Fridays through 6 a.m. on Mondays, and the street will be restored for weekday commutes. More details about the street restoration process will be released closer to the date when construction begins.