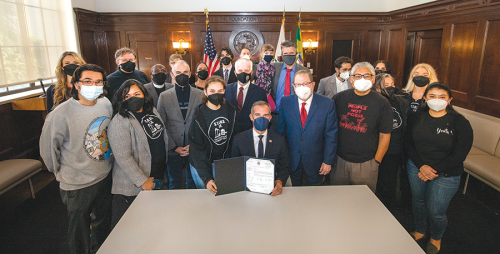 Los Angeles Mayor Eric Garcetti was joined by City Council members, environmental justice activists and community leaders on Feb. 4 for a signing of a directive to phase out oil and gas drilling in the city.

“Oil drilling has always been a part of our city’s DNA, but today, we begin a new chapter, the true beginning of the end of dirty energy production in Los Angeles,” Garcetti said. “The climate crisis demands a swift end to our dependence on fossil fuels, and by shutting down our oil wells and lifting up workers, we are putting communities first, helping keep the air clean for our families and moving closer to a clean energy future that doesn’t depend on dirty oil.”

As a result of the directive passed by the City Council, the Department of City Planning, with the assistance of the City Attorney’s Office, will draft an ordinance to prohibit new oil and gas extraction in the city and amend the zoning codes to prohibit ongoing extraction activities. The city will also study all drill sites and lead a “Just Transition Taskforce” with L.A. County to help workers transition from jobs in oil and gas drilling.

Garcetti has put Los Angeles on a path to phase out oil and gas production and better manage current production, representatives said. In 2016, he reinstituted the Office of Petroleum and Natural Gas Administration and Safety for the first time in nearly three decades.

The mayor also accelerated the progress of the Clean Up Green Up operation, advanced air quality monitoring programs and helped improve inspection protocols for industrial facilities.

Mayor nominates new member to Board of Public Works