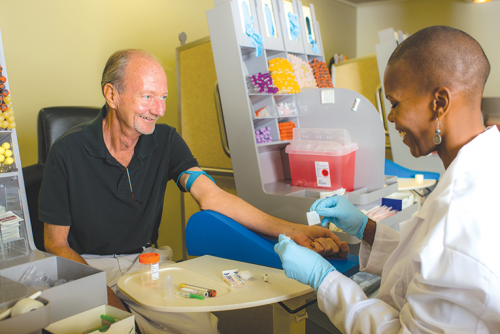 On Feb. 9, the Los Angeles County Board of Supervisors became the latest local entity to call on the Food and Drug Administration to alter its restrictions on blood donations for men who have sex with men.

Supervisor Janice Hahn, 4th District, authored a motion directing the Board of Supervisors to send a letter to current FDA Commissioner Janet Woodcock urging the reversal of the current policy.

“These outdated restrictions aren’t just discriminatory – they’re actively endangering the lives of people in need of blood,” Hahn said. “As we face the worst blood shortage we’ve seen in a decade, we have an easy way to increase our blood supply while putting an end to a homophobic policy that targets people for who they are and who they love.”

“The city of West Hollywood has long been a long-time advocate with our congressional partners at the federal level to overturn these rules and laws because we know that they do more harm than good,” Erickson said.  “And none of this has been more prevalent than what we’ve seen during the pandemic.”

Erickson noted that these restrictions are based on fear and that science has proved that fear to be unfounded.

“These laws that are still in the books at the federal level are homophobic, they are draconian, and they shouldn’t exist in a society,” Erickson said. “This is especially so in 2022 when we know that we’ve had the technology to screen for any type of disease that would ever be in a blood donation for decades.”

Erickson stated that the restrictions only perpetuate the feeling of “otherness” that society projects to members of the LGBTQ+ community.

“Growing up as a young gay kid in Wisconsin … I knew that it was almost impossible for me to ever give blood, or to have to self-disclose and what all that meant when you’re tainted by an organization that says, ‘You’re not good enough to give me that,’” Erickson said. “All you want to do is help save lives. It definitely takes a toll on so many people from all walks of life who need blood, and that need has only increased.”

Given the current national blood shortage, allowing this population to donate more freely would help ease the current deficit. According to research by the Williams Institute at UCLA School of Law, if the policy was undone, more than 600,000 pints of blood could potentially be donated.

For its part, the Los Angeles LGBT Center is participating in the Assessing Donor Variability and New Concepts in Eligibility study, which seeks alternatives to the current blood donation requirement. The study’s results seek to eliminate the abstinence period in favor of a more thorough questionnaire to assess a donor’s individual risk.

The Los Angeles LGBT Center is one of eight centers nationwide that was chosen to participate in the national study, LGBT Center director of advocacy and mobilization Joey Hernandez said.

The study has been extended by the FDA through July 2022 to meet an enrollment goal of 2,000 men. The findings of the study will be submitted to the FDA, which will review the data to determine what alternatives may be available.

Those interested in participating in the study can enroll at advancestudy.org.