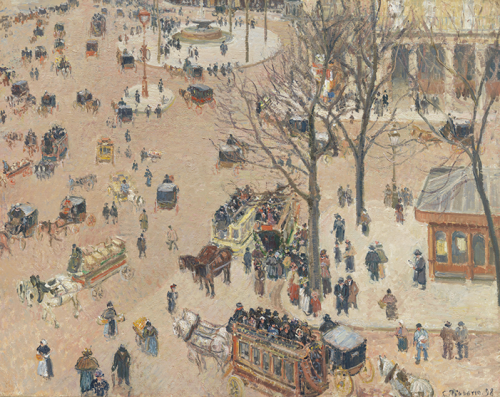 “City of Cinema” gives a detailed look into the beginning of film culture in 19th-century Paris. (Photo courtesy of Museum Associates/LACMA)

The Los Angeles County Museum of Art presents “City of Cinema: Paris 1850-1907,” an exhibition exploring the emergence of film in 19th-century Paris. Placing cinema in the context of modern Parisian visual culture, “City of Cinema” brings together paintings, sculpture, posters, prints, magic lantern slides, optical toys and devices along with photography and film, to reflect the wide range of artistic experiments that culminated in the first attempts at the moving image. Many of these works have never been on view in the U.S.

The exhibition is co-curated by Leah Lehmbeck, curator and department head of European Painting and Sculpture and American Art, and Britt Salvesen, curator and department head of the Wallis Annenberg Photography Department and Prints and Drawings Department, with collaborating curator Vanessa R. Schwartz, Professor of History, Art History and Critical Studies at the University of Southern California.

Co-organized with Musees d’Orsay et de l’Orangerie, Paris, the exhibition comprises of 195 objects across all media and draws significantly on Parisian repositories of visual culture including the Musee d’Orsay, the Bibliotheque Nationale de France, the Musee Carnavalet and the Cinematheque française. Additionally, “City of Cinema” will present a selection of the earliest examples of films from the five major French repositories of cinema: the Centre Nationale de Cinema, Cinematheque française, GP Archives, Fondation Jerome-Seydoux Pathe and the lnstitut Lumiere. One particularly striking display will be a working replica of the Theatre Optique, one of the earliest moving­ picture devices, used to project hand-drawn animated films – the first moving images presented to the public – in 1892.

“‘City of Cinema’ considers the early history of film in the larger context of cultural and art history, from the perspective of an art museum,” LACMA CEO and Wallis Annenberg Director Michael Govan said. “The exhibition is especially timely as we celebrate the opening of the Academy Museum of Motion Pictures next door to LACMA, as well as being another chapter in our decade-long art and film initiative. Through key loans from international partners, as well as objects from the museum’s permanent collection, ‘City of Cinema’ explores the interconnectedness of art and industry and the impact of new technologies and approaches on art and art history.”

Accompanying the exhibition is a fully illustrated catalogue with essays co-published by LACMA and DelMonico Books.

“To contextualize the social, artistic, cultural and political era of Paris, LACMA’s exhibition will focus on film and its audiences, as well as the makers and the milieu of which they arose as well,” Lehmbeck said.

“City of Cinema” is organized in four sections, with seven film projections placed throughout the show, culminating in a salle de cinema, which will have a longer film program.

The story begins on the streets of Paris, where a diverse populace of flaneurs, laborers, tourists and other urban citizens constituted the very beginnings of a collective audience for visual spectacle.

The second section examines the transformation of public spaces as places with the audience in mind, including the circus, cabaret, vaudeville and the theater. Many of these spaces already existed but were updated with artificial lighting, modern narratives and a heightened awareness that as spectators watched the stage, they were also being watched by fellow spectators. The Expositions Universelles of 1889 and 1900 will be of particular focus here, to showcase how France centered itself within a global narrative.

In the third section the focus shifts from the collective audience to the realm of the individual creator – from sites of consumption to sites of production, experimentation and innovation. The studio is thus considered a laboratory or factory.

At the threshold of the salle de cinema, the fourth and final section, the exhibition presents documentation of both early film studios and Parisian sites where the earliest films were projected. The films vary from actualities to historical recreations, fantasies, tricks and travel. Thrilling the Parisian audiences whose tastes have been charted throughout the course of this exhibition, these films were also intended to circulate throughout the wider world. The conclusion of this exhibition thus introduces cinema as a global medium.