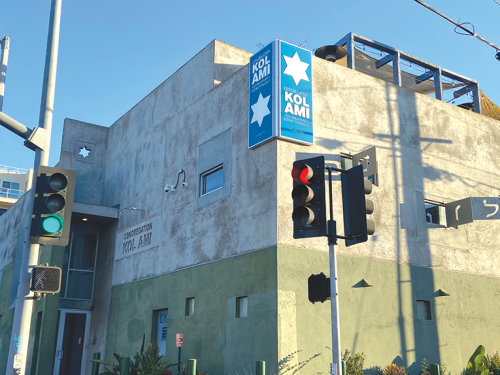 Leaders at Congregation Kol Ami in West Hollywood have been involved in formulating the plan. (photo by Edwin Folven)

Horvath cited instances of antisemitic violence occurring locally, nationally and internationally as impetus for the initiative, which aims to bring members of the Jewish community together with law enforcement and city staff to share information and best practices for protections. Plans call for the city to convene a working group that will meet regularly to discuss potential threats, expand resources, create protocols and disseminate information to the Jewish community.

“We wanted to do this after speaking with local rabbis and Jewish community leaders, not only to protect the community of West Hollywood but to hopefully create a template for what other cities throughout L.A. County, and throughout the country, can do to institute best practices and open lines of communication between city halls, public safety staff and Jewish community leaders. In the face of everything, from what we saw in Texas and in recent years from Poway to Pennsylvania, we know that antisemitism is on the rise, it is pervasive and it needs to be rooted out wherever it exists.”

Horvath met with local rabbis, Jewish community leaders, West Hollywood public safety staff and representative from the West Hollywood Sheriff’s Station to come up with ideas for a Jewish Community Safety Plan. They outlined goals and plan to reach out in the coming weeks to Jewish leaders in communities surrounding West Hollywood to broaden the scope of the initiative.

Initial goals include creating a calendar of Jewish holidays and other events during which the Jewish community may require special protections, and sharing the information among staff and law enforcement officials. Frequently, antisemitic hate crimes are committed on Jewish holidays and during holiday periods, she said. One such instance was the distribution of flayers containing hate messages that were found in Beverly Hills in December during Hanukkah.

Another incident cited was an attack on May 18 on Jewish patrons at a restaurant on La Cienega Boulevard allegedly committed by members of a pro-Palestinian group that was driving around in a caravan to protest Israeli government policies. Rabbi Denise Eger, of Congregation Kol Ami in West Hollywood, said the same caravan of protesters repeatedly drove by the La Brea Avenue temple the same day as the attack, raising fear and concern. Thankfully, no violence occurred at the temple, Eger added.

“It’s no secret, there has been an increase in antisemitic incidents, including in the L.A. area,” Eger said. “This is a way to work together with local government officials and the sheriff’s department in a more cohesive way. It creates a plan to raise awareness among city staff. This all makes a big difference for the community.”

Other components of the plan include compiling a list of resources for the Jewish community, increasing patrols around temples and community centers on Saturdays during the weekly sabbath as well as Jewish holidays, and implementing training on Jewish customs during city staff diversity training. The working group will also explore more training with the sheriff’s department and collaborations with the neighboring cities of Beverly Hills and Los Angeles. Horvath said an important consideration is ensuring resources and information are available in Russian, as it is the primary language spoken by many older members of West Hollywood’s Jewish community.

Lt. Bill Moulder, with the West Hollywood Sheriff’s Station, said law enforcement officials have been directly involved with the Jewish Community Safety Plan. He said deputies are available to visit any temple or community center, as well as apartment buildings, businesses and other public buildings, to conduct assessments on making facilities safer. Members of the sheriff’s station’s Community Oriented Policing and Problem Solving Team, known as COPPS, and the Entertainment Policing Team conduct the assessments, and anyone seeking information can call the station at (310)855-8850, or email Moulder at wcmoulde@lasd.org.

Moulder also mentioned that Dimitri Kermani, a member of the Jewish community who volunteers at the West Hollywood Sheriff’s Station, is a valuable resource. Kermani was involved in the planning for the safety initiative and serves as a liaison for the Jewish community. Kermani can be contacted by emailing dkermani@lasd.org.

“The main objective for us is to create a more coordinated effort to protect the community,” Kermani said. “Our goal is to create a plan of action on how to best respond to incidents. The West Hollywood Sheriff’s Station is taking this very, very seriously.”

Details of who will be included in the working group and when it will meet are being determined. Horvath added that she envisions the plan and process being flexible.

“We have a list of what action items we’ll be taking, and in a couple months, we’ll come together to see what progress has been made and what more we can do,” she added. “I want to make sure we are doing all we are coordinating on it.”