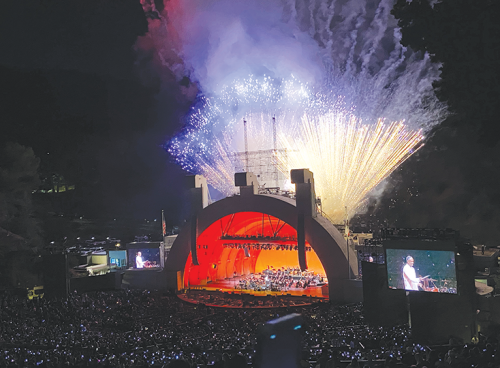 The 100th season at the Hollywood Bowl will include concerts, film programs and fireworks. (photo by Edwin Folven)

The Los Angeles Philharmonic Association has announced the 2022 Hollywood Bowl season, celebrating a century of performances at one of the world’s most iconic venues. The centennial season offers a mix of beloved traditions and history-making innovations, tributes to legendary figures of the Bowl’s past and contemporary stars, jazz and popular music performances, and 34 evenings under the stars with the Los Angeles Philharmonic, including 10 led by LA Phil music and artistic director Gustavo Dudamel.

“The Hollywood Bowl is much more than the summer home of the Los Angeles Philharmonic. For a hundred years, it has been a testament to live music’s power to create community, uniting people from all walks of life in a shared experience like no other,” LA Phil CEO Chad Smith said. “Thanks to the vision of Gustavo Dudamel and the collaboration of an astonishing roster of guest artists, our centennial season will celebrate the enduring spirit of the Hollywood Bowl and everything this magical place has meant to generations of musicians and music lovers alike.”

“There is truly no place like the Hollywood Bowl,” Dudamel added. “Nothing can compare to the feeling of performing there on a summer night, as our sound seems to pour out from the hills to the thousands of music lovers spread before us, gathered from everywhere in Los Angeles and around the world. We dedicate our programs in this 100th season to all the people who have made the Hollywood Bowl a part of their lives, year after year, and to the new generation, on our stage and in our audience, that is going to carry the magic of this place far into the future.”

Annual traditions will also light up the Hollywood Bowl including the July 4th Fireworks Spectacular (July 2, 3 and 4) featuring Steve Martin and Martin Short, the Steep Canyon Rangers and Jeff Babko with the LA Phil led by Wilkins. The Tchaikovsky Spectacular (Aug. 12-13) will include violinist Joshua Bell and the USC Trojan Marching Band joining conductor Bramwell Tovey and the LA Phil. The Bowl will also host the annual Broadway musical “Kinky Boots” (July 8, 9 and 10) featuring an all-star cast.

The season will include music and film presentations, three Maestro of the Movies programs celebrating John Williams (Sept. 2, 3 and 4) and the annual Sing-A-Long Sound of Music with host Melissa Peterman (Sept.17). Concerts paying tribute to musical legends from the Bowl’s history include Billie Eilish and Debbie Harry saluting Peggy Lee and Frank Sinatra (July 27), an evening of Rachmaninoff with soloist Nobuyuki Tsujii and the LA Phil (Aug. 16) and Itzhak Perlman as soloist and conductor in a program of works by Bach (Sept. 13). ABBA The Concert returns to the Bowl on Sept. 24.

For tickets and a full schedule of events at the Hollywood Bowl, call (323)850-2000, or visit hollywoodbowl.com.

BHPD arrests suspects wanted for series of robberies in 2021