‘Great Age of France’ comes to The Getty 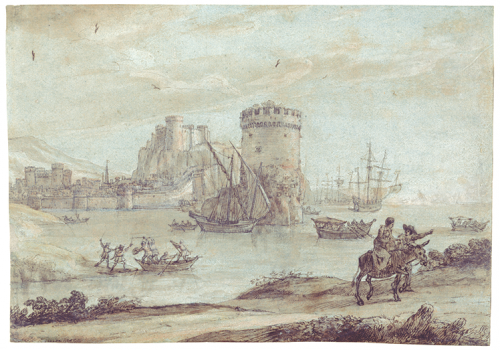 The art pieces celebrated in “Grand Design: 17th-century French Drawings” were inspired by the political turbulence of France. (photo courtesy of Getty Museum)

The Getty Museum presents its collection of 17th-century French drawings in its entirety for the first time, “Grand Design: 17th-century French Drawings,” open now through May 1. It addresses the emergence of a distinctly French school of art and explores the role that drawing played in the process.

“Today we recognize drawings by Nicolas Poussin and Claude Lorrain as landmark achievements of 17th-century European art,” said Timothy Potts, Maria Hummer-Tuttle and Robert Tuttle director of the J. Paul Getty Museum. “But in fact, drawing lay at the heart of all artmaking in 17th-century France, from the decoration of palaces and churches to the illustration of books. Drawing was where it began.”

French art came into its own during the 17th century, often called the Grand Siècle, or Great Age, of France. This period witnessed a series of violent political upheavals at home, the first stages of colonial expansion overseas and the rise of authoritarian absolute monarchy. This turbulent century fostered artistic activity on an unimagined scale. Expatriate French artists achieved fame in Rome, a Royal Academy of Painting and Sculpture was founded in Paris and vast building projects — most notably, the Palace of Versailles — employed whole generations of artists.

“Drawing helped 17th-century French artists make sense of the world around them, think through compositional ideas, and prepare finished works,” curator of the exhibition Emily Beeny said. “Each of these sheets invites us into its author’s creative process, whether observing nature, capturing a portrait likeness, designing a print or preparing a painting.”

The Getty is located at 1200 Getty Center Drive. For information, visit getty.edu/art/exhibitions/grand_design/index.html/visual-arts-flourished-in-France.