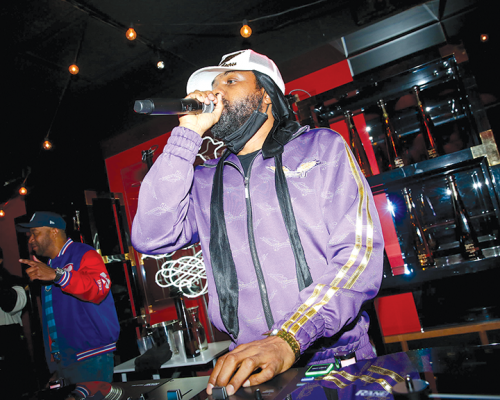 Mathematics from the Wu-Tang Clan made a surprise appearance during the event. (photo courtesy of the Hollywood Food Coalition)

The Tequila and Take-Out Party at Genghis Cohen was held on Feb. 11 and raised money to benefit the Hollywood Food Coalition, whose community dinner program provides more than 200 members of the community with their most pressing needs each night.

DJ Mark Ronson took to the stage alongside his wife, actress Grace Gummer, and her sister, Mamie Gummer. Members of Wu-Tang Clan dropped in for the party, and after requesting a song at the end of DJ Politik’s set, surprised the crowd with an impromptu performance of some of their greatest hits.

Since 1987, the Hollywood Food Coalition has served Los Angeles’ most vulnerable residents by providing meals along with access to basic daily needs, such as clothing, backpacks, sleeping bags and hygiene items, as well as assistance and referrals for housing and unemployment. T

Once a week, the UCLA mobile clinic visits to provide medical treatment and assistance. Other community partners provide other services, such as showers, haircuts, connections to housing and mental health care services, as well as professional services like financial mentorship and tax filing support.

Additionally, the coalition’s community exchange program, born during the pandemic, is a free, concierge food service aimed at providing small- to medium-sized social service nonprofits the food they need. Since its inception, the exchange has rescued and distributed more than 2 million pounds of food.