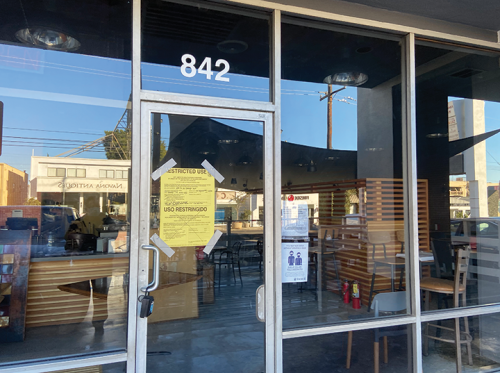 Vito’s Pizza on La Cienega Boulevard was forced to close after the fire until repairs are made. (photo by Edwin Folven)

Firefighters extinguished a blaze at Vito’s Pizza on a Cienega Boulevard on Feb. 5 and prevented the flames from spreading to other businesses in the same strip mall.

Personnel from the Los Angeles Fire Department and Los Angeles County Fire Department, based in nearby West Hollywood, were called to the building at 842 N. La Cienega Blvd. at approximately 7:40 p.m. and extinguished the fire in approximately 25 minutes. The pizzeria, which is located on the ground floor, was open when the fire occurred. The cause remains under investigation, LAFD spokesman Nicholas Prange said.

A civilian suffered smoke inhalation and was transported by ambulance to a hospital for treatment. Prange had no further information about the status of the victim or whether it was an employee or customer.

“We have nothing further,” he added. “It remains under investigation, which will take several days.”

The Los Angeles Department of Building and Safety yellow-tagged the pizzeria, forcing it to remain closed until repairs are made. A tenant in an upstairs unit in the building said smoke filled her shop, but it otherwise caused no damage.

“It was just the smell and soot, the black stuff all over the floor,” said the business owner, who declined to provide a name. “We got lucky.”