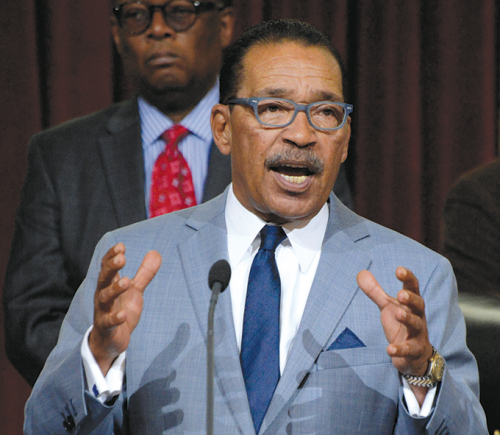 “With over 30 years in public service representing the residents of Council District 10, there is no better choice at this time than former Councilmember Herb Wesson,” Martinez said. “Mr. Wesson cares deeply about the communities he represents and knows the district better than anyone. The constituents of Council District 10 need a voting member who understands their community to represent them within Council chambers.”

Wesson represented the 10th District as a councilman from 2005 until December 2020. He previously served as chief of staff to former L.A. City Councilman Nate Holden.

Wesson would fill the vacant seat left by Councilman Mark Ridley-Thomas, who 10 months into his term was suspended from office by the council after a 20-count indictment was filed in Los Angeles federal court for federal bribery and conspiracy charges stemming from his time serving on the Los Angeles County Board of Supervisors. Ridley-Thomas has pleaded not guilty and is awaiting trial.

According to the Los Angeles City Charter, pending trial, the council may suspend any elected officer who has been charged with a criminal felony “related to a violation of official duties.” The council may fill a vacancy by appointing a person to hold the office for the portion of the unexpired term. If confirmed, Wesson would hold the office of Council District 10 through Dec. 31, or until Ridley-Thomas is acquitted or the charges against him are dropped.

Currently, the district is being overseen by a caretaker, Karly Katona, Ridley-Thomas’ chief of staff. Martinez chose to appoint a voting member instead of calling for a special election due to the potential charter-crisis that could ensue if residents were to elect another council member to the seat and Ridley-Thomas is cleared of all charges before his term is completed.

In 2019, following the resignation of Councilman Mitch Englander, then-Council President Wesson appointed former Councilman Greig Smith to serve as a voting member on the council.

Ridley-Thomas previously served two terms on the City Council representing Council District 8 from 1991 to 2002. He returned for his third, final term in 2020, and it is up in 2024. The motion states that “Mr. Ridley-Thomas would be eligible to resume his elected duties before the remainder of his unexpired term following his acquittal or when the charges against him are dropped.” Having served three full terms on the council, Wesson is ineligible to run for a council seat in the 2024 election.

Martinez met with residents and leaders before announcing her appointment, many of whom suggested Wesson to the appointment. The motion requires a simple majority to pass.

City approves steps to reduce use of single-use plasticware