BHPD arrests suspects wanted for series of robberies in 2021 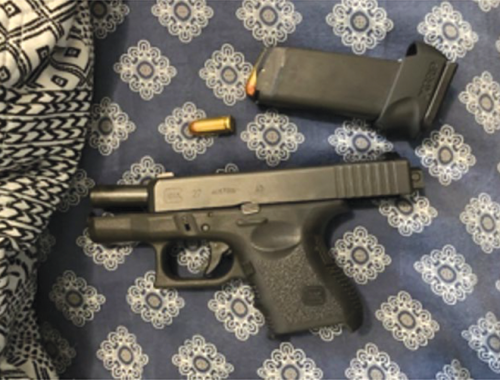 Police released a photograph of a handgun recovered during the investigation. (photo courtesy of the BHPD)

The Beverly Hills Police Department has arrested seven suspects for a series of armed robberies in the city in 2021.

A comprehensive investigation by BHPD detectives and other law enforcement agencies led to the suspects’ identification, police said. No further information was released about the crimes, including when and where they allegedly occurred.

Members of the Beverly Hills Police Department’s SWAT team and Detective Bureau served search and arrest warrants on Feb. 10 in the cities of Hemet, Banning and Winchester in Riverside County. SWAT team members from the Santa Monica, Hemet, Murrieta and Menifee police departments, and from the Orange and Riverside county sheriff’s departments, helped the BHPD serve the warrants. The investigation also included personnel from the Irvine, Brea and Upland police departments, as well as the Federal Bureau of Investigation and United States Secret Service.

Police said evidence connecting the suspects to the robberies was recovered during searches of the suspects’ residences. Investigators recovered a semi-automatic handgun that had been illegally converted to enable fully-automatic gunfire, police said.

The seven suspects were arrested and booked for robbery and conspiracy to commit robbery. They include Jeremy Hays, Ronald Christopher Mendez-Cantu Jr. and Mahmoud Fathi Salah, all 19-year-old residents of Hemet; Darrell Skakhan Hollawayne, 21, of Hemet; Dmari Josiah Beed, 20, of Murrieta; and Desmond Jay Hines, 20, of Winchester. Also arrested was an unnamed 15-year-old male juvenile from Banning. Hollawayne, Hines, Salah and Beed are being held on $1 million bail, while Hays, Mendez-Cantu and the unnamed juvenile are being held on $100,00 bail.

Detectives are still conducting a follow-up investigation, which may result in additional suspects being identified, police said.