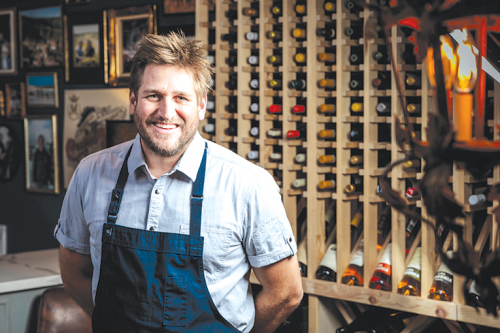 Beverly Hills chef Curtis Stone’s talents will be on full display during the SAG Awards on Feb. 27. (photo by Clay Larsen)

For the first time, Michelin-starred chef, restaurateur, author and culinary entrepreneur Curtis Stone will serve as the executive chef and oversee the menu for the 28th Annual Screen Actors Guild Awards.

The SAG Awards will be nationally simulcast live on TNT and TBS on Sunday, Feb. 27, at 5 p.m. from The Barker Hangar in Santa Monica and will be available the following day on HBO Max.

“The SAG Awards are an iconic ceremony celebrating so much talent in the industry. It’s been an honor and privilege to collaborate on this evening and I’m very excited to bring this menu to life with my team in a few short weeks,” the chef said.

“We are thrilled to have chef Curtis Stone and his team at Curtis Stone Events join us this year. They have been great partners in crafting a menu that our nominees and guests won’t soon forget. We are looking forward to celebrating together again at the SAG Awards – with Curtis’s amazing food for everyone to savor,” SAG Awards executive producer Jon Brockett said.

The menu will consist of turmeric roasted cauliflower; a mint and quinoa salad; sweet potato with curry, coconut, cilantro and cucumber; artichoke and mushroom; truffle dressing; and salmon rillettes with lemon, capers and dill.

Stone is a Los Angeles-based chef who began cooking at the Savoy Hotel’s five-star restaurant in his hometown of Melbourne, Australia, at the age of 18. He moved to Europe when he was 21 to further his education and classical training under renowned chef Marco Pierre White for eight years, a foundation that would inform his subsequent career in Los Angeles.

In 2014, Stone opened his first solo restaurant, Maude in Beverly Hills to immediate acclaim. Following the success of Maude, which reopened on Feb. 14, Stone opened Gwen Butcher Shop & Restaurant in Hollywood in July 2016 with his brother, Luke.

The brothers opened their second restaurant together, Georgie, modeled after Gwen, with restaurateur Stephan Courseau in Dallas in fall 2019.

In addition to the restaurants, Stone operates Curtis Stone Events in Los Angeles, a full-service events and catering company that crafts personalized occasions for guests. Stone is known for his appearances on television programs such as “Take Home Chef,” “Top Chef Masters,” the Emmy-nominated “Top Chef Junior” and he makes frequent appearances on “MasterChef Australia.”

In fall 2019, Curtis debuted “Field Trip with Curtis Stone” on PBS, a six-episode series inspired by his global travels to research the regional menus at the newly minted Michelin-starred Maude. Season two premiered in October 2020 and is streaming on Peacock and Tastemade.

Most recently, Curtis filled a judge’s seat for “Crime Scene Kitchen,” a new baking competition hosted by Joel McHale, which premiered in May 2021. A New York Times bestselling author, Stone has authored six cookbooks, including his most recent, “Good Food, Good Life.”