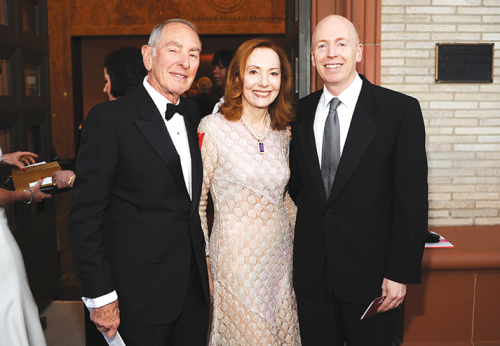 Paul Selwyn, left, his wife Joan and son Marc Selwyn attended The Wallis’ inaugural gala and were longtime supporters of the arts. (photo courtesy of The Wallis)

Many people are mourning the death of philanthropist, community leader and founding president of the Wallis Annenberg Center for the Performing Arts Paul Selwyn, who died on Feb. 17 at his home in Beverly Hills.

A stalwart figure in the Beverly Hills community for more than eight decades, Selwyn emigrated to the United States from Belgium in 1938, just before the onset of World War II. He attended school in Beverly Hills and played on the Beverly Hills High School tennis team before attending UCLA, where he was a member of the tennis and cricket teams, and the ROTC program. After graduation, he was commissioned as an ensign in the U.S. Navy and served in the Philippines.

Selwyn took a job with the Herald International in Hong Kong before returning to Beverly Hills in 1958, where he became vice president of Pauling and Company. He met his wife-to-be, Joan Gordon, in 1959. The two shared a love for philanthropy, which suffused their relationship and was reflected in the values with which they raised their son, Marc. In 1968, Selwyn became owner of Pauling and Company. He retired in 1990, but did not slow down, merely redirecting his energies to other areas of the community.

Selwyn was a founding board member of the Los Angeles Children’s Museum, where he served as president and chairman. He served on the Beverly Hills Architectural Commission from 1980-86, and was later appointed to the Beverly Hills Planning Commission, serving from 1986-94. Selwyn served as chairman of both commissions twice during his terms.

In 1996, Selwyn launched and became president of the Beverly Hills Cultural Center Foundation, which later became the Wallis Annenberg Center for the Performing Arts. He served on The Wallis’ board of directors until 2014, and holds the title of founding president.

Selwyn is survived by his wife, Joan, son, Marc, and daughter Laura. Joan and Marc Selwyn are Wallis ambassadors and with Laura, long-time supporters who share their father’s love for The Wallis, Beverly Hills and the arts. The Selwyn family was a frequent visitor to The Wallis outside his regular attendance at shows and events. For information, visit thewallis.org.

Crowd dispersed outside concert at The Roxy