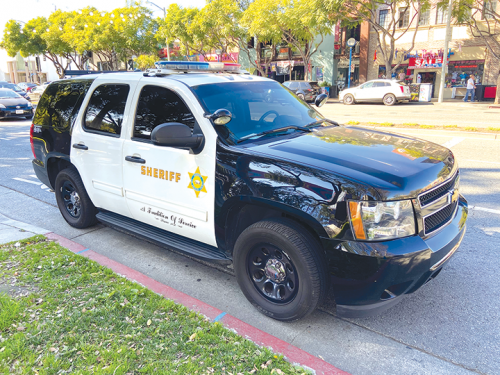 The city of West Hollywood is investigating the possibility of ceasing or reducing low-level traffic stops in the city with the hope of freeing up law enforcement while reducing racial bias and possible profiling.

The West Hollywood City Council on Jan. 18 voted 4-1 to have the City Attorney Lauren Langer and the city’s Public Safety Division analyze possible measures West Hollywood could take and report back to council at a later date.

“I just want to make it very clear that these are for non-public safety traffic issues,” said Mayor Pro Tempore Sepi Shyne, who initiated the discussion together with Councilwoman Lindsey Horvath.

According to a staff report, a 2020 study conducted by Stanford University researchers found that Black motorists were, on average, pulled over and searched more frequently than their white counterparts.

Shyne also referenced a recent report by the California Racial and Identity Profiling Advisory Board that had similar results. It included data from the Los Angeles County Sheriff’s Department.

Horvath said that, according to sheriff’s department data, the city of West Hollywood had more than 700 traffic stops in 2019 for vehicle registration or license plate issues.

“The goal behind this is to de-escalate situations to make sure that, from a cost perspective, we’re making the best use of our resources, both in terms of dollars and cents, but also in terms of the time that our law enforcement officials have to spend on addressing and preventing crime in our community,” she added.

The report referenced legislation passed by the city of Philadelphia that banned traffic stops for broken brake lights, broken headlights, registration issues, driving without an inspection or emissions sticker, bumper problems and minor obstructions, such as something hanging from a rearview mirror.

“We’re not saying, necessarily, no enforcement,” Horvath said. “These are the types of issues that can be enforced in other ways – perhaps with a mailed citation.”

Mayor Lauren Meister suggested that the council wait to pursue any action until it receives a report from the Center for Policing Equity on the West Hollywood Sheriff’s Station. No timeline has been given for the issuance of the report, however.

“I’m just wondering why we’re not waiting to see that report,” Meister added.

Shyne said the city should act now and possibly implement additional initiatives after the report is released.

“Given that the sheriff’s department data is part of [the advisory board study], I can’t wait one more day to provide justice for Black and brown people that are being pulled over at a higher rate, that are [experiencing] use of force at a higher rate,” Shyne said.

Although the council wants more localized data, it could be a long time before the center releases the report, Councilman John Erickson said.

“We’ve asked for it multiple times, and I don’t feel confident that it’s going to be coming back anytime soon,” he added.

Councilman John D’Amico made the motion to direct the proposal to the city’s Public Safety Commission. Meister reiterated her interest in seeing the Center for Policing Equity report prior to moving forward and was the lone no vote.

“What might seem like a simple traffic stop to some people can be a matter of anxiety and uncertainty, or even life and death, for people of color in this country, especially, as history shows, for Black men,” he said. “In this context tonight, though, we’re not talking about dangerous moving violations like speeding, running red lights or driving under the influence. We’re talking about people getting pulled over for hanging an air freshener from the rearview mirror or forgetting to take their parking pass down.”

According to the staff report, the city has set a precedent in directing the sheriff’s department to make certain offenses low priority, such as the investigation and arrest of individuals who used medical marijuana in 1996. In March, the City Council directed the department to no longer target specific sex work-related offenses.