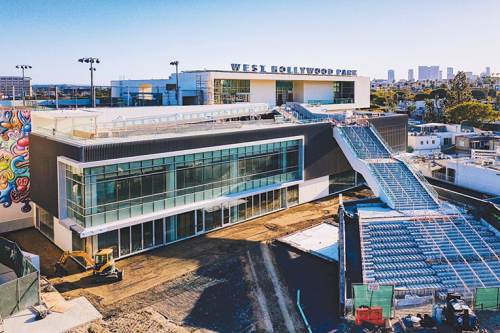 The West Hollywood Park Aquatic and Recreation Center will include roof-top swimming pools, a multi-sport court, community rooms, classrooms and a public access television studio. (photo courtesy of the city of West Hollywood)

Envisioned as a space for programs, events, sports and recreation, the facility is nearing final completion. Although the project was subject to unforeseen delays due to the COVID-19 pandemic and supply-chain disruptions, the city is excited about opening the new facility to the community.

The city is also moving forward on a phased approach to opening improved park amenities. El Tovar Place is open, re-establishing a connection between San Vicente and Robertson boulevards, as well as access to West Hollywood Park and the five-story parking structure. The West Hollywood Library’s plinth garage is also open, providing staff and patron parking when the library is open.

The city plans to move forward soon on the AIDS Monument, a collaboration between the Foundation for a National AIDS Monument, artist Dan Tobin and the city of West Hollywood. The AIDS Monument will be located in the park’s expanded open space along San Vicente Boulevard. For updates, visit weho.org/whparkproject.