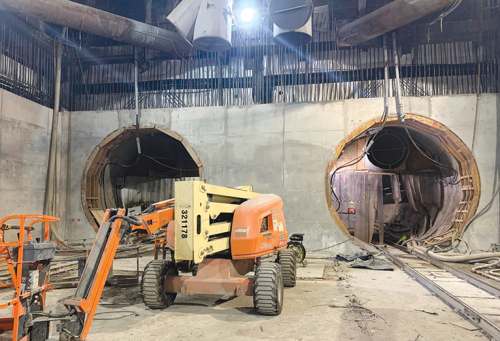 Crews are pouring concrete and conducting other work on the tunnels at the Wilshire/La Cienega station. (photo courtesy of Metro)

The Los Angeles County Transportation Authority is holding the next lunchtime webinar on the Purple Line Extension subway project on Wednesday, Feb. 2, from noon to 1 p.m., via Zoom. The webinar will provide information about all three sections of the subway line, which is under construction between  Wilshire/ Western and the VA Hospital campus in Westwood. The meeting can be viewed on Facebook Live by visiting facebook.com/purplelineext. To join the Zoom meeting, visit zoom.us/j/96626476708 and use the webinar ID: 966 2647 6708.

Work is ongoing at many locations along the tunnel alignment under Wilshire Boulevard. In Westwood, crews are relocating underground infrastructure in preparation of subway station construction on the VA Hospital campus. Preliminary construction is also occurring near Wilshire/ Gayley for the future Westwood/ UCLA subway station.

Another subway station on the line will be located in Century City near Constellation Boulevard and Avenue of the Stars. Crews are relocating sewer and storm drains and excavating the future subway station. Excavation and tunneling support is ongoing within construction staging yards at the site. Partial traffic lane closures will be required on Avenue of the Stars and Constellation Boulevard.

At Wilshire/La Brea, construction is occurring on the subway station and tunnels. Wilshire Boulevard will be reduced to two lanes in each direction between Detroit Street and Highland Avenue through April 4. Sycamore Avenue will also be closed immediately south of Wilshire Boulevard.