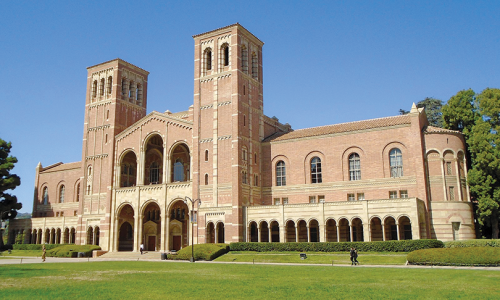 Some of the season’s performances will be held in UCLA’s Royce Hall. (photo courtesy of Wikimedia Commons)

UCLA’s Center for the Art of Performance, which specializes in contemporary performance, will return to Royce Hall and The Theatre at Ace Hotel in March.

Tickets go on sale to CAP UCLA members from Jan. 18-19 and will be available to the public starting on Thursday, Jan. 20.

A few shows may be familiar, as COVID-19 postponements required new dates. They include Anthony de Mare’s “Liaisons 2020: Re-Imagining Sondheim from the Piano” and Jennifer Koh and Davóne Tines’ “Everything Rises.” Viewers of this season’s “The Tune In Festival” got a sneak peek at Tines’ baritone vocals in the prelude to Julius Eastman’s “Holy Presence of Joan d’Arc.”

In March, prolific choreographer Ronald K. Brown and his company return in a live new work titled “The Equality of Night and Day: First Glimpse.” Returning favorites DakhaBrakha and David Sedaris will also perform in April and May, respectively.

The last show CAP UCLA presented at Royce Hall was “Parable of the Sower” by Toshi Reagon. The sold-out concert opera, based on Octavia Butler’s popular novel, received critical acclaim. Reagon will return to Royce Hall in April, accompanied by her band BIGLovely.

Royce Hall is located at 10745 Dickson Court on the UCLA campus. The Theatre at Ace Hotel is located at 929 S. Broadway, downtown. Single tickets to all CAP UCLA performances at The Theatre at Ace Hotel are sold via AXS. For information and tickets, call (888)929-7849, or visit acehotel.com. For information and tickets to performances at Royce Hall, call (310)825-2101, or visit cap.ucla.edu.