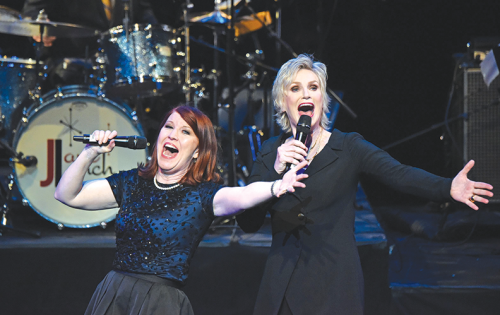 Kate Flannery, left, and Jane Lynch star in “Two Lost Souls” at The Wallis. (photo courtesy of The Wallis)

Emmy Award-winning singer and actor Jane Lynch (“The Marvelous Mrs. Maisel,” “Glee”) and Kate Flannery (“The Office”) return to The Wallis Annenberg Center for the Performing Arts on Thursday, Jan. 20, at 7:30 p.m. with their hilarious cabaret show “Two Lost Souls.”

Lynch and Flannery put their one-of-a-kind spin on songs from Broadway and the Barry Sisters to the Swingin’ ‘60s. Lynch, who is also a playwright and author, received an Emmy and Golden Globe award for her portrayal of Sue Sylvester on “Glee.” She is currently host of NBC’s “Hollywood Game Night” and can be seen on Amazon Prime’s “The Marvelous Mrs. Maisel.” In 2018, Lynch and Flannery premiered “Two Lost Souls” in New York.

Flannery is best known for appearing as Meredith for nine seasons on NBC’s “The Office” and recently performed on ABC’s “Dancing With The Stars.” Flannery is also Lynch’s sidekick in “See Jane Sing.”

The Wallis is closely monitoring health and safety protocols. If plans change and performances must be postponed or cancelled, or if venue capacity limitations are instituted, ticket holders will be notified immediately with options per The Wallis’ ticketing policies.

The health and safety of patrons, staff and artists inside and outside the venue are a top priority for The Wallis, which is requiring all patrons to provide proof of full vaccination including a booster shot, or a negative COVID-19 test. Face masks are required at all times while within the venue.

Tickets start at $39. The Wallis Annenberg Center for the Performing Arts is located at 9390 N. Santa Monica Blvd., in Beverly Hills. For information and tickets, call (310)746-4000, or visit thewallis.org/souls.