The latest ‘Matrix’ ages poorly, but is still fun to debate 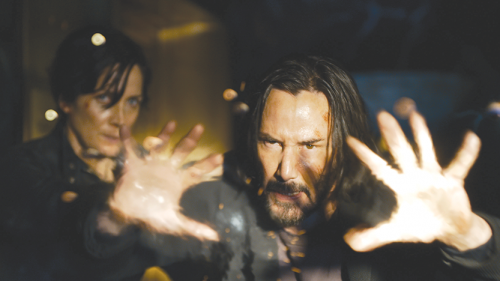 Carrie-Anne Moss and Keanu Reeves return in “The Matrix Resurrections,” the fourth venture in the series. (photo courtesy of Warner Bros. Pictures)

When Neo took that red pill in 1999, emerging from a pod ready to confront Sentinels and Agent Smith, audiences encountered a gem worth seeing on the biggest screen possible.

What went terribly, terribly wrong? The mediocre outcome isn’t shocking, considering the Wachowskis’ previous films like “Speed Racer” and “Jupiter Ascending” (though only Lana Wachowski returned to direct and co-write this one). But it tries to introduce too many new ideas without moving along.

The primary emotion on display in “The Matrix Resurrections”: cringe. Following Facebook’s lead, this “Matrix” goes meta – too meta. These films have always gone that route, inviting debate with nods to Plato’s cave, biblical references and Eastern aesthetics.

Now, add cliche to the mix: overt discourse on media culture. Characters debate the plot of the original “Matrix,” consider what counts as derivative and one returning antagonist even demands a spin-off series.

This is all the more disappointing considering the Wachowskis’ previous project: “Sense8” on Netflix (Lana took the lead after the first season). Across two seasons and a final film, a remarkable sci-fi world unfolded with lore as intricate as the series was sexual, to the dismay of some viewers turned off by illicit scenes.

Lana Wachowski’s final statement on complaints about her self-described “pansexual” story was the most drawn out, graphic of such scenes to end the show, complete with a message “for our fans.” That’s a baller move, the ultimate move to establish an auteur signature unwilling to allow naysayers any room in her vision.

Little of “Sense8’s” boldness carries over, even though several familiar faces from that show jump to the big screen here. “Resurrections” lacks a personality. No cinematic creativity or clever fight choreography.

But the worst parts of “Sense8” – corny jokes and a host of prolonged sequences of all kinds – do teleport to this realm.

How are Neo (Keanu Reeves) and Trinity (Moss) still alive? “Resurrections” explains that in an appropriate fringe-science way. And like the original film, any attempt to summarize even the most basic plot points spoils the journey. What can be said: Neo and the free-minded folk have a simple task that takes too long to arrive.

The first hour sludges through extended montages and a host of conflicts that can only lead to one conclusion. After that, a touch of intrigue graces the screen, but the central problem remains: the final moment should’ve been the start of act three.

Perhaps one of the greatest sins lies in the airwaves. Recall Neo and Trinity’s building raid, taking on ample security guards in a lobby to an epic techno track, “Spybreak” by the Propellerheads. In compliance with too many major studio films, “Resurrections” sidelines music composition, pushes it to the background. 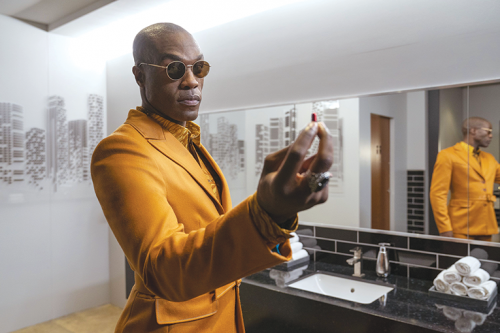 Yahya Abdul-Mateen II, as Morpheus, is a standout in “The Matrix Resurrections.” (photo courtesy of Warner Bros. Pictures)

To the film’s credit, a couple new faces shine. Jessica Henwick’s Bugs is the best of the new generation’s freedom fighters, with a pair of killer sunglasses (best warn at night, per “Matrix” standards) and moves to boot. And Yahya Abdul-Mateen II as Morpheus (yes, that’s explained) steals every scene, a common trend across his other recent roles including HBO’s “Watchmen” and “Aquaman.”

The primary strength of “Resurrections” lies in its creator’s goal. Channeling that “Sense8” confidence, Lana Wachowski creates something entirely her own. This is a director loosed from studio restrictions.

More than 20 years ago, “The Matrix” served as a trans allegory implicitly. As time went on, she confirmed several folks’ suspicions. With “Resurrections,” the allegory is much more overt, as the film doubles down on questions of identity and power, with that help of a villainous therapist (Neil Patrick Harris) who tries to subdue Neo with lingo that feels current but hides its nefarious motivations.

Ideology, cultural norms and the nature of humanity remain prominent themes throughout the fourth “Matrix” venture, reminding us all that films are best enjoyed with a good conversation once the story fades to black. And like two other films in this series, “The Matrix Resurrections” is better as a topic of discussion than a fully enjoyable film.

It’s All Day Baby for me