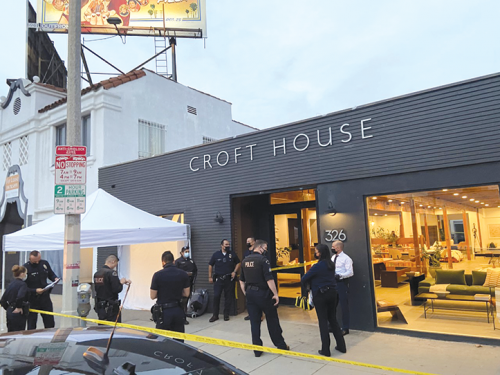 Investigators remained at the crime scene for hours on Jan. 13, searching for clues in the murder. (photo by Edwin Folven)

Los Angeles Police Department detectives are searching for a male suspect who allegedly murdered a 24-year-old woman on Jan. 13 inside a furniture store where she worked on La Brea Avenue.

Officers from the LAPD’s Wilshire Division received a call at approximately 1:40 p.m. from a customer who entered Croft House at 326 N. La Brea Ave. and found the victim unresponsive on the floor. The victim, Brianna Kupfer, of Pacific Palisades, was stabbed to death, police said.

Investigators recovered security camera footage and are searching for the suspect, who fled through a rear door and was last seen heading northbound in an alley behind stores on the east side of La Brea Avenue. The store is located just north of Beverly Boulevard.

Police have not established a motive. They believe the suspect is homeless, randomly entered the store and did not know the victim. Detectives did not divulge whether anything was stolen.

The suspect was described as Black, tall and thin, and was wearing a dark hooded sweatshirt, dark jeans and sunglasses. He was wearing a N95 face mask and carrying a backpack.

The murder is being investigated by the LAPD’s West Bureau Homicide Unit. Anyone with information is urged to call (213)382-9470. During weekends and off-hours, call the LAPD’s hotline at (877)LAPD247.