Suspect arrested for burglary at Crustacean 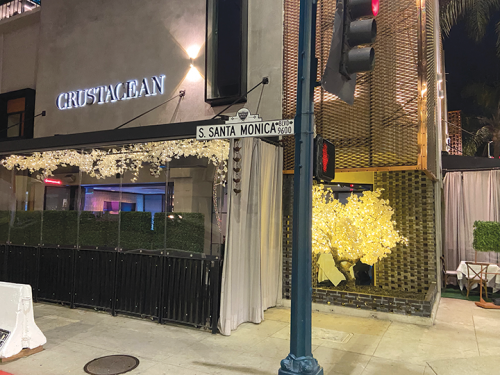 A burglary was reported on Jan. 4 at Crustacean, a restaurant located at South Santa Monica Boulevard and Bedford Drive. (photo by Edwin Folven)

The suspect, identified as James Williams, 47, of Los Angeles, was taken into custody on Jan. 4 at an undisclosed location in Hollywood, BHPD Lt. Giovanni Trejo said. He described Williams as having a long criminal history involving burglaries and said the suspect was wanted for other break-ins in Beverly Hills.

“He’s not believed to be homeless, but we believe he goes from place to place and has a long, extensive rap sheet,” Trejo said. “He has been arrested on multiple occasions during the past 12 months.”

Trejo said cash and liquor valued at $182,000 was stolen from Crustacean and has not been recovered. The lieutenant added that the value of the loss was high because the suspect stole several expensive bottles of liquor, but he declined to reveal the brand. Trejo said the burglar forced open a side door and entered the restaurant between 4:30 and 5 a.m. Security camera footage, both from cameras operated by the city and the building in which Crustacean is located, helped authorities identify Williams as the suspect, he said.

“The detectives checked surveillance video and recognized him as being wanted for other burglaries,” Trejo added. “The detectives did follow up and were able to ID him. It turns out he is a prolific commercial burglar.”

Trejo declined to offer details about the other burglaries allegedly committed by Williams, other than they occurred during the past year. He said authorities had been searching for Williams, but did not disclose exactly how they found him.

“I would say it was through investigative means including digital databases and also the surveillance system, as well as good old fashioned police work,” Trejo added. “The detectives were able to come up with several locations where he was known to hang out. He was taken into custody without incident.”

Williams was booked for four counts of burglary and is being held without bail at the Twin Towers Correctional Facility in downtown Los Angeles. He is next expected to appear in court on Jan. 21.

Trejo said additional law enforcement resources have been deployed in the Beverly Hills business district to prevent crime. He said that residents and business owners should be aware of the potential of becoming a victim of crime and should take precautions.

“It’s definitely something to be aware of,” he added. “There has been an increase in patrols of not only police units, but armed security guards who have been notified to maintain a close watch and increased presence in the business district.”