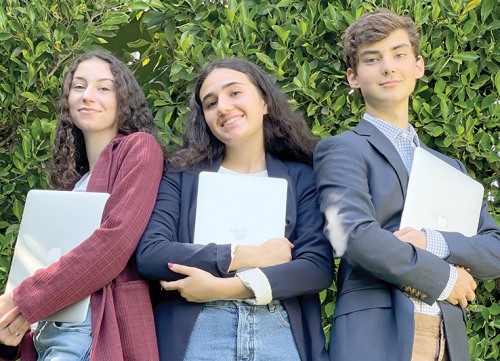 After discovering a knack for online research while helping her grandfather in a legal case, a Beverly Hills teenager created an organization to help legal teams discover relevant information using virtual resources.

Social Media Justice League founder Arielle Hatton, 18, has enlisted the help of more than 20 other students from 14 schools to fill what they see as a gap in legal research – the likes of Facebook, Instagram and Twitter.

“I think one of the main things that the Social Media Justice League brings to the table is that we really know social media like the back of our hands and can easily navigate [platforms],” she said. “You can go online and learn somebody’s whole life story in a couple of clicks. It’s really cool what we’ve been able to do, and it’s something a lot of teens are doing on a regular basis.”

Hatton, a Palisades Charter High School senior, started the nonprofit organization in December 2020 with friends from school after helping her grandfather’s legal case. She couldn’t provide many specifics, but said he was being sued and she obtained the case documents. Curiosity took over, and Hatton began looking for the plaintiff on social media.

“I found some posts on her Instagram and a lot of tweets that conflicted with what she was saying in her deposition,” she said. “We used a lot of that information, put it into a presentation and gave it to the attorney that was working on my grandpa’s case. He actually used it to bring her to the negotiating table.”

Hatton said she found that many law firms were also experiencing gaps in their research. Oftentimes, firms use private investigators for that research, but it can be expensive, she said.

“Aside from that, the people that are conducting these searches are from an older generation,” Hatton added.

She said the Social Media Justice League wanted to branch out and reach students outside of Los Angeles and Beverly Hills. Most of the marketing is through word of mouth, but it’s been successful, Hatton said. Seven U.S. states and Canada are now represented, and most of the participating students are aspiring attorneys or interested in law.

“It’s kind of cool just to cross borders,” Hatton said. “We all helped recruit. … We understood that the more people we had, the more powerful this idea would be and the more opportunities we would have.”

The students meet once a week on Zoom and assign tasks accordingly.

“I don’t want to make it sound like it’s easy,” Hatton said. “It’s definitely not easy. A lot of the stuff that we are looking for takes hours to find – it’s not surface-level stuff. You have to do one preliminary search and then really go deeper to find stuff, across multiple platforms. It takes a couple hours, so there’s definitely a time commitment.”

She finds the time, however. In addition to her schooling, Hatton is on the school’s mock trial team and is the editor of the school newspaper, “Tideline.”

“I think that’s something we’ve done really well – splitting up the work so that nobody has too much on their plate,” she added.

Hatton said the Social Media Justice League has worked on eight or nine cases, with two more upcoming. She said the league has done the majority of its work with Los Angeles law firms.

“We used Yelp one time, which was kind of a niche place that we thought we wouldn’t find a lot of information,” Hatton added. “But we actually used Yelp to find a new witness in a malpractice case. It was cool to see our work come to fruition in that kind of way.”

She is excited at the progress the league has made and looks forward to continuing to find “digital breadcrumbs” for law firms.