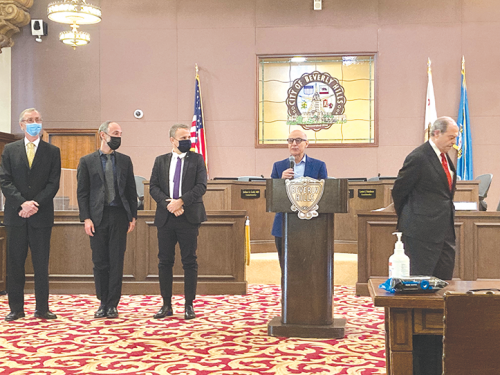 With the COVID-19 pandemic still an ever-present issue in daily life, scientists are searching for clues and information to help better understand the disease and its many components.

Svante Pääbo, David Reich and Liran Carmel were recently recognized by the Beverly Hills City Council in recognition of their groundbreaking work on ancient human DNA and how it can help answer some questions about the nature of COVID infections.

The ceremony was to acknowledge the scientists winning the Massry Prize, awarded by the Massry Foundation in conjunction with USC and UCLA.

“Although there is a rivalry between USC and UCLA, this is the first time I put them together and they were very happy to cooperate in this important process,” said Shaul Massry, the prize’s namesake, who served as the chief of nephrology at USC Keck for 26 years.

Each year since 1996, a five-person award committee, which is comprised of medical professionals who work at USC, UCLA and Cedars-Sinai, selects a new, specific field of research it wishes to highlight and crafts a list of five to eight nominees. Ultimately, the committee selects two or three winners whose work provides outstanding contributions to the biomedical sciences and the advancement of health.

This year’s topic was ancient DNA and awards were given to Pääbo, Reich and Carmel for their discoveries that have shed new light on the origins of humans and how they cope with disease. Their research is on hominins, a direct cousin of modern-day humans, and what they might tell about human biology.

Dr. Clive Svendsen, director of the Regenerative Medicine Institute at Cedars-Sinai and member of the prize committee, shed light on why the team’s research was selected.

“They were able to actually reconstruct DNA from the fractured bones of [Neanderthals] that have been sitting for 40,000 years,” Svendsen said. “They managed to take that ancient DNA, relate it to the DNA of current people and by doing that, they’ve figured out a lot more about these ancient humans than we ever knew before.”

One standout finding by the group was made by Pääbo, a German professor at the Max Institute for Evolutionary Genetics in Leipzig, Germany, who discovered a possible connection between the Neanderthal gene and modern disease.

The hope for these findings is that it will lead to new ideas about how to better and more specifically treat infections in patients, in correspondence with their particular DNA.

Prize winner Reich, who currently serves as a professor at the departments of genetics and human evolutionary biology at Harvard University, noted that he hopes the award leads to more of a spotlight on this field of research.

“The field, of course, has many more people than just, the three people who received the award” Reich said. “And I think that it’s a recognition in many ways of the field and not just of our contribution.”

Beyond the prestige, the winners were granted $300,000 and an all-expense-paid, three-day trip to Los Angeles to present their findings to faculty and students at USC and UCLA before being lauded at Beverly Hills City Hall during the awards ceremony, and lunch at the Four Seasons.

Note: Recipient Liran Carmel was out of the country and could not be interviewed by press time.

Mourners show outpouring of support at vigil for Brianna Kupfer