Schiff throws hat in the ring for 12th term 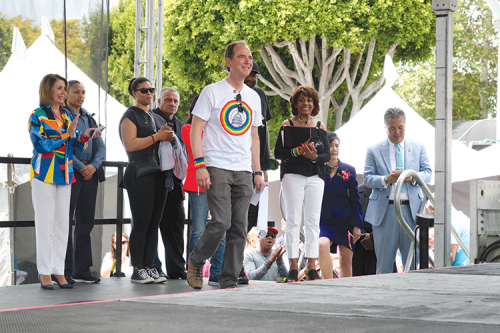 Congressman Adam Schiff has served in Congress since 2001, and is running for another term. (photo by Jon Viscott)

U.S. Rep. Adam Schiff (D-Burbank) announced on Jan. 3 that he is running for a 12th term in Congress, and said he plans to reach out to voters in all corners of his expansive district.

That district changed in December under the congressional redistricting process, which expanded the area Schiff represents to include Park La Brea, Miracle Mile and Hancock Park. The district sill stretches from Pasadena to West Hollywood and includes Glendale and Burbank, but now extends farther south to San Vicente Boulevard. The redistricting process also changed the number of Schiff’s congressional district from 28 to 30.

“I am grateful for the support that I have in the community. It’s an honor to represent my constituents in Congress. There is so much more work to do,” Schiff said. “I think this is such a pivotal time in our nation’s history, and I look forward to going out and meeting with my new constituents and my old constituents and making the case for my campaign.”

Schiff has served in Congress since 2001 and has been re-elected 11 times. The congressman said he is focused on broad issues such as foreign relations, national security, climate change and pandemic recovery, but believes issues affecting the local community such as homeless and economic stability are important.

“It’s always exhilarating to get to know new neighborhoods and community leaders and individuals and residents, and I look forward to working with them to address their local priorities. I have made it my practice over many years to make sure that even as I work on issues of national significance, that I be very much focused on local matters and my local constituents,” Schiff said. “I look forward to sitting down with them and getting to know what their particular needs are. I know from representing adjacent areas the importance of making sure the economy is working for everyone, that everybody can afford to keep a roof over their head and can put food on the table. So those are two of my top priorities, bringing a timely end to this pandemic and also making sure the economy is working for everyone and that everyone can be housing secure.”

Schiff also cited progress that was made in 2021, including pandemic relief legislation that brought financial aid to struggling families, the federal infrastructure bill that will finance major transportation system upgrades, and a new law to reduce prescription drug costs. Legislation approved by the House of Representatives but pending in the Senate to expand parental leave, make childcare more affordable and expand services for families will be a focus moving forward, he added.

Schiff also highlighted legislation he authored to provide financial aid during the pandemic to people working in the entertainment industry. Under previous laws, those who are self-employed or have supplemental income from temporary jobs were often excluded from collecting unemployment insurance, and Schiff said he championed a bill that extended unemployment benefits to those workers.

“But there are still enormous challenges ahead, with the pandemic and the economy, and dangerous threats to our democracy that must be overcome,” Schiff said. “I’m running to make real progress on the big issues [such as] ending the pandemic, making the economy work for everyone, making health care universal, fighting climate change, lowering costs for all families and keeping us safe, and on local issues like ensuring everyone has a roof over their head, preserving open space for generations to come and investing in new, greener infrastructure and mass transit.”

Schiff highlighted his work on the Select Committee investigating the Jan. 6 insurrection and efforts he has made to protect voting rights.

“And I’m running because there remains a grave threat to our democracy. Across the country, Republicans are assaulting voting rights, undermining our elections and attempting to break down the pillars of our democracy,” Schiff said. “We cannot take our democracy for granted and need champions pushing back against these assaults on our institutions. I will continue the fight to protect the fundamental right to vote and to secure our cherished legacy as a democracy.”

Schiff will first appear on the ballot in the June 7 primary, and the general election is Nov. 8.