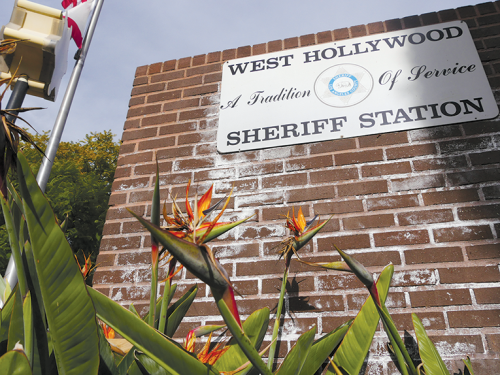 The city of West Hollywood continues to look at ways to safely and humanely police its streets. (photo by Emily Holshouser)

The West Hollywood Public Safety Commission met on Jan. 10 to hear a safety report from the sheriff’s department and to discuss the city’s Block by Block ambassador program, which provides security ambassadors who are deployed citywide to assist law enforcement.

The commission discussed the city’s contract with the Block by Block Security Ambassadors program, touching on new ideas for staffing and safety precautions the program could implement throughout the city.

Block by Block provides services to the city under a contract of approximately $2.23 million for the 2021-22 fiscal year, according to a staff report.

A full report on Block by Block was rescheduled for the commission’s February meeting.

Among the new ideas discussed were adding new kiosks to areas of West Hollywood such as Ramada Plaza, and supporting a Block by Block public education program, which was suggested by vice chair Alana Roshay in a previous meeting.

The commission also briefly discussed the safety of Block by Block ambassadors, who are unarmed. Chair Tory Berger noted recent incidents of violence against ambassadors.

“Our ambassadors are trained to remove themselves from those situations as safely as they possibly can,” said David Aguilar, a representative for Block by Block. “As far as them being armed, it is against our policy. We can have the conversation, but it’s going to be a tough sell.”

“Accountability is key when working through budgetary decisions,” West Hollywood City Councilwoman Lindsey Horvath said in a statement. “It’s important that our city be thoughtful and intentional when we allocate millions of dollars for services that our residents depend on every day.”

The public safety commission discussed which resources to allocate toward the sheriff’s department in the new fiscal year, which starts July 1, and reviewed a detailed expense report by the department.

According to the sheriff’s safety report, West Hollywood crimes such as grand theft auto, aggravated assault and petty theft have increased over the past year.

Commissioner Nika Soon-Shiong mentioned a public safety presentation given by the activist group Dignity and Power Now. According to the presentation, 20% of residents in Los Angeles neighborhoods felt a decrease in safety between 2013 and 2018.

“It’s absolutely true that people are feeling less safe. At the same time, if we look at the graph, the investment in law enforcement is going up,” Soon-Shiong said. “What are we getting for this money, and is it helping people feel more safe?”

The commission discussed how to balance the desire to have public safety solutions while still deploying law enforcement to appropriate incidents.

Councilman John Erickson attended the meeting to offer support for the discussion.

“This is a moment where we’re seeing everyone wanting to make sure that they’re safe in their homes and in their businesses,” Erickson said. “It’s supposed to be a difficult conversation.”

The West Hollywood Public Safety Commission agreed to continue the conversation during the February meeting.

No official conclusion on budget recommendations for the sheriff’s department or the Block by Block program was reached.

The next commission meeting will be held on Feb. 14.