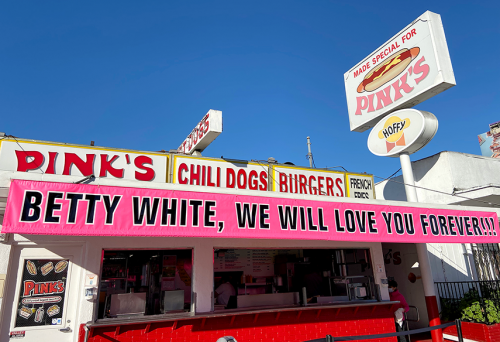 In honor of actress Betty White, who died on Dec. 31 at the age of 99, Pink’s Hot Dogs is donating all proceeds of sales of the Betty White Naked Hot Dog through Jan. 9 to the Los Angeles Zoo.

The Betty White Naked Hot Dog is a 9-inch all-beef stretch dog in a bun without toppings, just as White liked it, said Richard Pink, who operates the stand with his wife, Gloria, and sister, Beverly Pink-Wolfe. Pink said he met White in 2010 at the opening of a Pink’s Hot Dogs stand at Universal CityWalk, where the Emmy Award-winning actress made a celebrity appearance. Afterward, Pink offered her a hot dog and asked what toppings she wanted.

“She said, ‘I want nothing on it, I just want it naked. I like beef in a bun,’” Pink added. “I told her we should have a Betty White Naked Hot Dog at Pink’s, and she said that would be wonderful.”

The Betty White Naked Hot Dog has been on the menu ever since, Pink said, adding that White also occasionally stopped by the hot dog stand at Pink’s Square near La Brea and Melrose avenues.

“Every once in a while, I’d come over to Pink’s around six o’clock at night and see Betty White with her girlfriends sitting in the back of the dining room,” Pink said. “They said, ‘We wanted to get dinner before we go over to the Hollywood Bowl, so what better place than to stop by Pink’s?’ The girls were all having naked dogs and said, ‘We like them just like Betty likes them.’”

The Betty White Naked Hot Dog is $5.20. Pink’s is also honoring the actress with a banner hanging across the front of the stand that reads, “Betty White, We Will Love You Forever!!!” A photograph in the dining room shows White posing with Gloria Pink and the late former Los Angeles City Councilman Tom LaBonge.

Richard Pink added that he saw White every year at the Beastly Ball, an annual fundraiser held by the Greater Los Angeles Zoo Association. He is donating proceeds to the zoo because White was a longtime advocate for animal rights and protection. GLAZA and the zoo also paid tribute to White, highlighting her support for the zoo since its opening in 1966.

“Her work with the Greater Los Angeles Zoo Association spans more than five decades, and we are grateful for her enduring friendship, lifelong advocacy for animals and tireless dedication to supporting our mission,” GLAZA president Tom Jacobson said.

“She was a long-time champion and friend of the L.A. Zoo who advocated for us and helped to amplify the work we are doing to conserve wildlife,” added Denise M. Verret, CEO and director of the Los Angeles Zoo. “She cared deeply for all living creatures – including us. Her loss leaves a great hole in our hearts. The L.A. Zoo cannot thank Betty enough for her decades of support. There truly will never be another person like her.”

“The opening at CityWalk was the beginning of a beautiful friendship, and Betty White became someone who has been so close to us,” Pink said. “She was such a great comedic genius who was just hilarious. Every other word out of her mouth made you chuckle or laugh. Betty White could even get laughs out of eating hot dogs.”