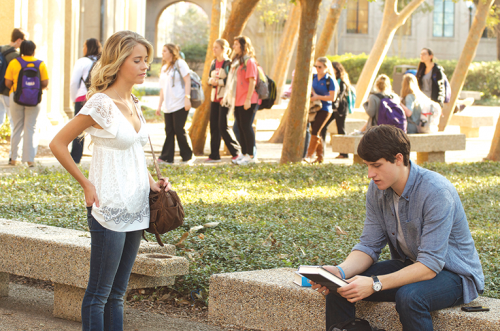 The worst is yet to come, according to “2025: The World Enslaved by a Virus,” a Z movie hiding in the bowels of online media. Rather than summarize the premise myself, how about the kinda-sorta filmmakers speak for themselves.

“The world as we know in 2020 does not exist anymore,” the exposition reads at the start. “The virus changed everything. Communism is all over the place. A global state developed, meetings are illegal, travel is illegal, and Christianity is illegal.”

Before I go further, I should share a bit of bio I’ve mentioned in this column before, even if so briefly. I don’t approach a film like this as an outsider. I’m a pastor’s kid, seminary graduate and church member. And films like this – nearly all Christian films, for that matter – make my blood boil.

Bad art has that effect on me. But Christian films that receive at least a limited theatrical run enjoy more production value and much better quality than this. That doesn’t make them good, just a touch more polished.

Everything about “2025” – quite literally all of it, from music, acting, editing, cinematography, performances, props – is a nightmare. Even the iTunes Store summary spoils the ending, which I have no qualms with revealing since my primary goal is to keep you all from supporting this bovine waste.

“A group of Christians are trying to overthrow the World Government by spray-painting the ichthys on fallen leaves,” the description reads. “They meet a bitcoin miner who helps them mail out DVDs of sermons. They are then caught and executed.”

I have so many questions about the choices here. The transition from a small group talking God to the hero – played by co-director, co-writer, producer, editor and mediocre special effects tech Joshua Wesely – tagging the city in the name of Jesus.

As for “2025’s” particulars, my words won’t suffice. Instead, I call on my first witness, an astute IMDb user, who calls it “the kind of movie where the protagonist flubs one of his lines during his big, dramatic speech at the film’s halfway point, a hacker can apparently do anything but is also shown using Wikipedia, Google Image search and Word documents, and a cover of ‘Amazing Grace’ is rapped over (terribly, at that).”

Some other user highlights include “boring propaganda,” “astonishingly detached from reality” and “huh?” IMDb comment sections aren’t normally a kind place, plenty targeting the most beloved of television media, but the anonymous folks who suffered through “2025” got it right this time. Besides, this film deserves no grace.

Frankly, I can’t fault the brother production team behind “2025” too much. This is a genre often devoid of creativity. Along with biblical adaptations, inspirational stories and whatever Kirk Cameron vomits out, there’s a whole lotta gaslighting.

“2025” wouldn’t exist without the “God’s Not Dead” trilogy, which elates at the fictional anxiety that the educated elite, the government or them libs are out for the largest religion in the world. Their favorite tactic is the concocted, contrived scenarios with simple answers and simpler enemies. 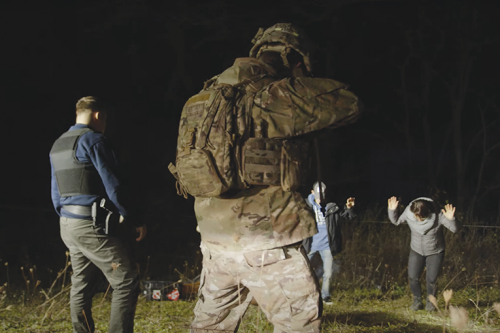 “Communism is everywhere” as “2025” begins, though how it spreads like a virus is never addressed. (photo courtesy of Wesely Bros)

This pandemic film presents that martyr complex with higher stakes but less thinking. The most thought probably went into researching the premise. It ain’t easy to copy and paste that many looney complaints from anti-vax Facebook groups and then translate them into a screenplay with even less human emotion.

Add to that Wesely, a creepy German fellow on his own. While the social media buzz around “2025” gained traction, an Instagram screenshot featured Wesely next to his then-girlfriend of four years turning 18. Apparently 14 is the age of consent there, but “a thing doesn’t have to be illegal to be hair-raising and gross,” Patheos’ Mary Pezzulo writes in her review.

Part of me views this experiment in self destruction in the same vein as “The Room,” the quintessential film so bad it’s charming. Nope, can’t do it. This is shameful in both quality and substance, and only exists to incite the fear, even if it fails to do much at all.

It’s no threat. But plenty of its ilk are. All those self-righteous, spiteful sermons brimming with hate and misinformation while they parade as films belong nowhere.

Alas, some will find solace in “2025,” praising it for boldly confronting a major current event even if production falls flat. To that I cringe. To that I’m embarrassed.

Randy’s Donuts and the Rams