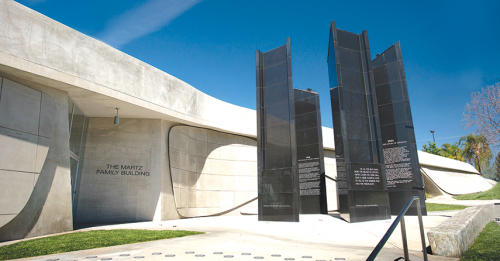 A program on International Holocaust Remembrance Day and the anniversary of the liberation of Auschwitz will be held on Thursday, Jan. 27. (photo courtesy of Holocaust Museum Los Angeles)

In the wake of a rise in anti-Semitism, Holocaust Museum Los Angeles is holding a virtual commemoration of International Holocaust Remembrance Day and the anniversary of the liberation of Auschwitz on Thursday, Jan. 27, at 6 p.m. The event is presented in partnership with the Consulate General of Israel in Los Angeles.

The program will begin earlier at 11 a.m. that day with a virtual talk by Auschwitz survivor David Lenga.  Born in Lodz, Poland, in 1927, Lenga and his family were confined to a ghetto in the suburb of Strykow, where they spent the first two years of World War II. Lenga’s family was later forced to move into the Lodz Ghetto, where he was eventually separated from his mother and younger brother. In 1944, he was sent to Auschwitz and later to a labor camp in Bavaria. Lenga and a few other prisoners escaped and hid throughout southern Germany until they were liberated by American troops in May 1945.

Recognized by the United Nations, International Holocaust Remembrance Day commemorates the Holocaust and marks the date that Auschwitz was liberated. The museum’s commemoration will include a presentation with Pavel Belsky, who will discuss the layout and function of Auschwitz from his unique perspective as a cartographer. Dr. Hillel Newman, Consul General of Israel to the Pacific Southwest Region, will also speak during the event.

For information and registration, visit holocaustmuseumla.org.