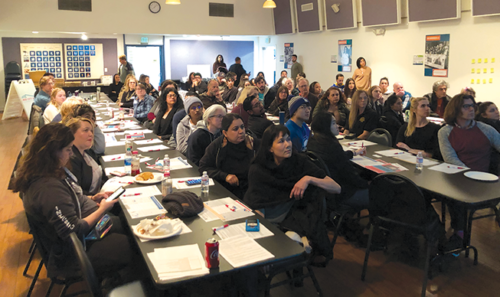 The Mid City West Neighborhood Council is seeking volunteers for its 2022 Homeless Count, which will be held from 6 p.m. Jan. 27 to 12 a.m. Jan. 28 at Television City, 7800 Beverly Blvd. Online training opportunities will be held Jan. 24-27.

The council’s Homelessness, Refugees and Renters’ Rights Committee discussed the event during a special meeting on Jan. 3 and announced that approximately 50 individuals have signed up to volunteer. However, the committee is still seeking additional volunteers.

The Mid City West event is part of the Greater Los Angeles Homeless Count, which will be held Jan. 25-28. Since 2016, the Los Angeles Continuum of Care has held the count, as required by the U.S. Department of Housing and Urban Development. The annual homeless count was not held in 2021 due to the COVID-19 pandemic, but the Mid City West Neighborhood Council held a local count last year.

The annual homeless count is an essential component in getting vital information that helps provide an accurate picture of the state of homelessness in Los Angeles and deliver services where they are most needed. It also increases general homelessness awareness with the public and increases engagement with leaders, residents and stakeholders.

The U.S. Department of Housing and Urban Development mandates that the Point-In-Time Homeless Count be conducted the last 10 days in January across the entire country. People with extremely limited income who cycle in and out of homelessness typically are not sheltered during this time of the year, as they have depleted their funds on motels and other living expenses, according to the Los Angeles Homeless Services Authority.

Organizers take several steps to make sure the street count is as thorough as possible. Teams of professional street outreach workers are assigned to hard-to-reach areas, such as river embankments and heavily wooded areas. Each volunteer across the county watches the same training video to ensure uniformity.

This year, volunteers will be able to download Akido Connect “LA Homeless Count App” from their Apple or Android app stores. Akido Connect, the app developed by Akido Labs, will replace the pen and paper tally system, and volunteers will mark their tallies directly in the mobile app. Deployment site coordinators will have access to a dashboard where they can view the tallies for specific census tracts.

The results will be released to the public in summer 2022 at lahsa.org/homeless-count. For information, visit theycount-willyou.org/midcity_west_count_20220127.

Testing offered at many sites during COVID-19 case surge