Metro pushes full steam ahead in the new year 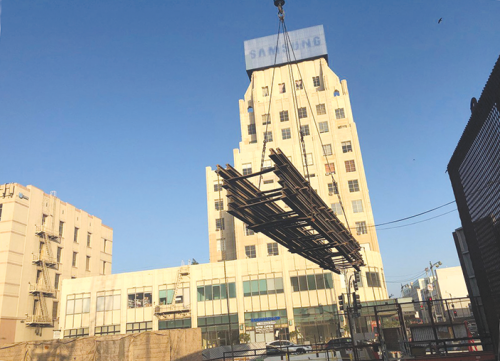 Temporary rails are being removed near Wilshire/La Brea and hauled away as crews install permanent rails in the subway tunnels. (photo courtesy of Metro)

Metro is rolling into the new year with more work on the Purple Line Extension subway project.

Construction continues on underground structures known as appendages at the Wilshire/La Cienega station, and Metro has announced that through October 2022, a work zone with K-rails will be in place on the north side of Wilshire Boulevard between San Vicente Boulevard and a location just west of Gale Drive. The work zone will support appendage construction and excavation, material delivery and hauling. Noise mitigations will be implemented in the area. Gale Drive will be temporarily closed north of Wilshire Boulevard, and left turns from Wilshire Boulevard to south Tower Drive will be restricted.

Work is ongoing at many other locations along the route. At the future Wilshire/Rodeo station in Beverly Hills, lane closures may be in place on Wilshire Boulevard between El Camino and Crescent drives. Construction will also occur at staging yards near Wilshire/Reeves.

Crews are conducting subsurface investigation work underneath Wilshire Boulevard through mid-January between Stanley Drive and Le Doux Road. The work will determine whether additional measures will be needed to stabilize the subway tunnels in the area.

Crews are preparing to install subway rails at the Wilshire/La Brea subway station, where temporary rails have been removed for use in other projects. Work around the Wilshire/La Brea station also includes underground pipe relocation and appendage construction. Wilshire Boulevard will be reduced to two lanes in each direction between Orange Drive and Detroit Street through the end of the first quarter of 2022 to accommodate the work.