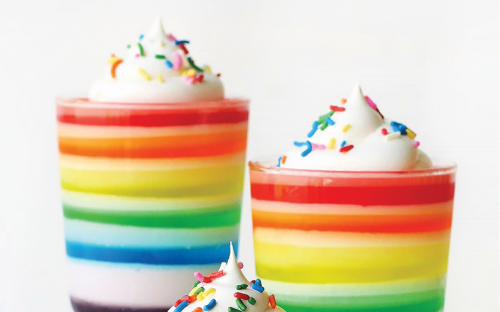 One Gay Straight Alliance group made Jell-O parfaits similar to the ones above during a Zoom meeting. (photo courtesy of glorioustreats.com)

The COVID-19 pandemic has impacted support networks for vulnerable communities, but in a surprising twist, it provided some LGBTQ+ youths with new opportunities.

In West Hollywood, the pandemic has a similar feel to a previous crisis affecting the LGBTQ+ community.

“When you think back to when the city was incorporated back in 1984, the city was in the midst of another pandemic of sorts, the AIDS crisis,” said Leslie Isenberg, social services supervisor for the city of West Hollywood. “There are funds set aside each year by our City Council, and the funds are earmarked to support nonprofit organizations that serve the wide variety of needs of our community members in West Hollywood.”

The city of West Hollywood set aside more than $5 million for services dedicated to the LGBTQ community in the 2021-22 budget, an amount that has grown over the years. Part of the funds go to organizations like the Los Angeles LGBTQ Center, which provides services for queer youth and adults.

The AIDS epidemic raged across America in the 1980s and 1990s, killing more than 700,000 people, according to the Kaiser Family Foundation.  Decades later, LGBTQ service providers said that crisis has been replicated by COVID-19 due to vaccine hesitancy and distrust in public health guidance.

“The struggles that youth have around getting vaccinated kind of reminds me of the time when gay men didn’t want to get tested for HIV,” said Richard Zaldivar, founder of The Wall Las Memorias, a nonprofit that focuses on the impact of HIV/AIDS on the Latino community. “One [reason] was fear of the unknown, two was, ‘it’s not going to happen to me, it’s going to happen to someone else, because things like that don’t happen to me.’”

The Latino community has shown disproportionately high rates of COVID-19 cases and a higher mortality rate, according to data from the Los Angeles County Department of Public Health. According to Zaldivar, for LGBTQ Latinos, the challenges are often twofold, especially for young adults.

“Because of how Latinos grow up – our culture and religious views – for some, it’s not easy to come out of the closet, so they create a second familia outside of their blood family,” Zaldivar said. “With COVID, what we’ve seen with the lockdowns of locations where youth can socialize, it’s been really difficult because they’re not able to have that camaraderie of good friends and support.”

A 2021 study by the Trevor Project, a nonprofit organization dedicated to serving LGBTQ youth nationwide, found that more than 80% of LGBTQ youth surveyed stated that COVID-19 made their living situation more difficult. Approximately 48% said that they wanted counseling but could not obtain it in the past year.

“When you go to school, school is great. It’s not only a place of learning; it’s a place where you’re socializing, learning more about yourself, developing your skill set,” Zaldivar said. “You can’t do that at home, and it’s really difficult to do it on Zoom.”

Some Los Angeles Unified School District students have been learning remotely for the better part of two years. Many students struggled to come to class at the beginning of the pandemic. Enrollment plummeted, and parents struggled to find childcare so they could continue working, according to data from LAUSD. For some LGBTQ students, when schools closed, it meant the loss of critical resources that helped them find a community and feel proud of their sexuality. For others, it was a chance to be someone new.

While LAUSD makes many resources like Gay-Straight Alliance meetings and groups for parents of queer youth available, those resources went online during the pandemic. What could have turned into a disaster turned into a new way of connecting students.

“Some students did not go to the GSA meetings at school, but they did go to the ones online. At school, maybe they didn’t want anyone to know, maybe they weren’t ready yet,” said Dr. Judy Chiasson, human relations, diversity and equity coordinator for LAUSD. “But online, nobody they knew was there.”

Chiasson said that the transition to remote meetings gave some students a newfound sense of anonymity and safety.

“What I found was that we were able to create an online community, which was in some ways more vibrant,” Chiasson said. “You may not have 20 queer kids at a middle school who are out, but we could get 20 of them online in a support group. They could meet up with 20 middle school-aged students from across the district. It really did, in some ways, expand the opportunities to connect.”

It’s not all humdrum therapy groups, either, according to Chiasson. GSA groups have adapted during the pandemic, and become more inventive to keep kids interested.

“If people are interested, we’ll keep them. We don’t need to stop them even if they’re in person,” she added.

Those who need LGBTQ resources through the city of West Hollywood can visit weho.org/services/social services. LAUSD parents and students can visit achieve.lausd.net/ domain/156 to learn about LGBTQ resources provided by the Office of Human Relations, Diversity & Equity.

Schiff throws hat in the ring for 12th term